The Walking Dead officially bid farewell to Chandler Riggs and Carl Grimes with a tribute video that highlights some of the character's best moments and his growth in the show.

Sunday's episode of The Walking Dead was a heartbreak to watch for fans who have grown to love Chandler Riggs and his character Carl Grimes. Riggs was a series regular on the AMC series and one of the original characters. He appeared on the show since he was 10 years old and people saw him grow before their eyes, so it was an emotional moment to see him die.

After eight years, Riggs is saying goodbye to his eye-patched character and AMC has given the actor and his character a proper send-off via a tribute video. The video is a compilation of his scenes from when Carl appeared in Season 1 all the way through his final moments in Season 8. The tribute opens with a voiceover of Rick Grimes reminding his son to toughen up and a quick shot of Carl all grown-up.

"People are gonna die there's no way you can never be ready for it. Best we can do now is avoid it as long as we can keep one step ahead. No more kid stuff," Rick says in the video below.

There is a scene showing a young Carl running toward his dad and asking if everything is going to be alright now that they are together. The video also flashes back to when Carl first wore his father's hat after he got shot and has not parted with it since then.

There are scenes of Carl meeting new people, including Michonne and Daryl, and meeting his baby sister Judith. Despite the way that they live their life — always on the move looking for a safe haven — Carl remains strong and hopeful.

"We were strong enough that we can still help people," he reminds his father.

The Walking Dead tribute video ends with Carl and Rick hugging each other and the words "R.I.P Carl" flashes on the screen.

The Walking Dead Season 8 episode 9 bid farewell to Carl Grimes. After revealing a fatal walker bite in episode 8, Carl decided to end his life to avoid succumbing to the zombie virus. Rick and Michonne buried him after he shot himself.

"His death leaves behind a really inspiring and motivational feeling. He's not really angry about it. He's not lashing out against anyone. It's his fault that it happened and there's nothing that he can do about it. So it's him trying to show Rick every lesson that he's learned over the last few years," Riggs said about Carl's death in The Walking Dead. 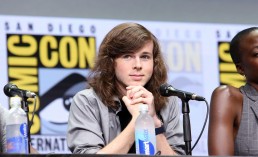 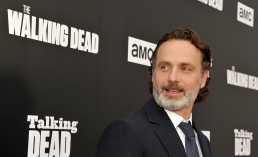 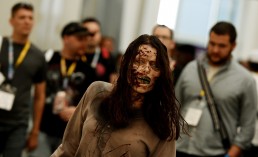