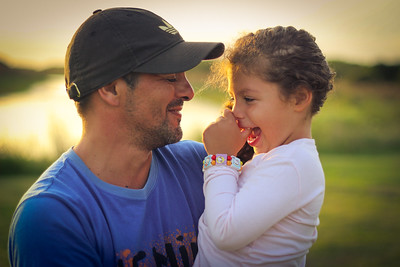 Dads are known to be protective of their daughters. They also want to raise their sons to be respectable men. Unfortunately, the modern dad has it more challenging with technology and rebellion.

Ye has banned his only daughter North West from wearing crop tops and makeup. The rapper did not always have problems with mini-dresses until he had a "religious awakening."

Now, West credits his spiritual transformation to the changes in his parenting style. He even tried to convince his wife, Kim Kardashian, to dress a little more conservatively.

Rapper Clifford Joseph Harris Jr. aka T.I. was recently criticized for his parenting. In the "Ladies Like Us" podcast, T.I. revealed he takes his 18-year-old daughter Deyjah Harris to the gynecologist every year after her birthday to make sure her hymen was still intact.

Deyjah later unfollowed T.I. and the rest of her family on social media. The podcast hosts also deleted the episode and apologized to their listeners.

Record executive Gotti backs up T.I., telling critics not to judge the rapper's parenting style. He admitted to his own effort to prevent his daughter from engaging in premarital sex.

Irv revealed that he once had the birds-and-bees talk with his daughter and her boyfriend. To emphasize his point, he pulls out a hand gun. Her daughter's boyfriend has been nothing but respectful in all the eight years they have been together.

The actor adopts an old-school style of parenting. He would reportedly require his children to address elders with "Yes, Sir" or "No, Ma'am."

His parenting style may have worked, as all four of his children grew up to be respectable adults.

The 89-year-old legendary actor reportedly used corporal punishment to discipline his children. Now all grown up, most of his children are in the entertainment industry.

It would seem his influence on them was strong.

Cruise is widely known as a Scientologist. Any of his partners or children that don't share the same beliefs would not benefit from his presence.

After their divorce, Katie got full custody of Suri and Tom chose not to visit her because she was not a Scientologist. He also refused to attend his daughter Isabella's wedding for the same reason.

Only Connor shares a father-and-child bond with Tom. Connor adopted the Scientologist ways and was granted a luxurious life by his dad.

Father and daughter (Photo by Damian Bakarcic via Flickr)