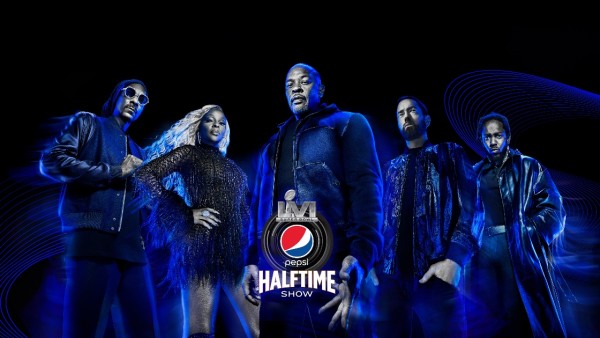 In a first for music fans, Dr. Dre, Snoop Dogg, Kendrick Lamar, Eminem, and Mary J. Blige are set to perform on the same stage for the 2022 Super Bowl Halftime Show. As titans of hip hop and R&B, these artists have 43 Grammys and 22 No.1 Billboard Hits between them.

As the third Halftime show collaboration between Pepsi, the NFL, and Roc Nation, this event takes place at SoFi Stadium in Ingelwood, CA. The announcement regarding the Halftime show was released Thursday. The 12-minute set is part of the first Super Bowl to take place in LA in over 30 years, marking this as a significant LA homecoming for artists, Dr. Dre, Kendrick, and Snoop Dogg. Last year, The Weeknd headlined Super Bowl LV's Halftime show in Tampa, FL.

According to Deadline, Todd Kaplan, Pepsi Marketing VP said, "Artists like Dr. Dre and Snoop Dogg were at the forefront of the West Coast hip hop revolution, so to be able to bring the back to LA, where it all began, alongside Eminem, Mary J. Blige, and Kendrick Lamar will prove to be an epic, unforgettable celebration of the impact hip hop has today."

Super Bowl LVI will air on February 13, 2022 on NBC and Telemundo and stream live on Peacock. Catch this moment of cultural and musical history if you can!

Tags: dr. dre Snoop Dogg kendrick lamar Eminem Mary J. Blige
© 2022 EnStars.com All rights reserved. Do not reproduce without permission.
Most Popular
You May Also Like

Dr. Dre and his estranged wife, Nicole Young, are still embroiled in their legal battle.

Dr. Dre is now an official and eligible bachelor after a judge restored his single status amid his divorce from Nicole Young.

Dr Dre seemed to have slammed his estranged wife in a newly-released snippet of a new song.

Dr. Dre and his rumored girlfriend, Apryl Jones, were photographed coming in and leaving a restaurant together.

Dr. Dre's divorce saga with his estranged wife, Nicole Young, continues. According to TMZ, Young wants to know if the music mogul is funding his alleged mistresses' lifestyles.

Dr. Dre Spotted Working Days After Being Released from Hospital for Brain Aneurysm

Dr. Dre isn't going to miss any more work days after being hospitalized for a brain aneurysm.

Dr. Dre has been discharged from the hospital and is now on the road to recovery after suffering from brain aneurysm.