We live in a world of re-watching. Some of the most popular shows on Netflix are shows whose episodes aired years ago. The Office and Parks and Recreation are even more popular today than they were when new episodes were being released. When it comes to Zillenials, there is not a show we won't rewatch.

If you were a middle school girl in the year 2010 (or an advanced fifth grader), it is more than likely that you spent seven years of your mind, body, and brain cells on the Freeform (at the time, ABC Family) show Pretty Little Liars. The show was based on the book series by Sara Shepard and starred Lucy Hale as Aria, Shay Mitchell as Emily, Ashley Benson as Hanna, Troian Bellisario as Spencer, Sasha Pieterse as Alison, and Janel Parrish as Mona. PLL tells the story of a girl in an affluent town who goes missing, and years later, her friends start getting anonymous, blackmailing texts from a blocked number. This mysterious person, self-identified in the show as "A", seems to follow the girls everywhere, know every secret they have, and actively work to ruin their lives. 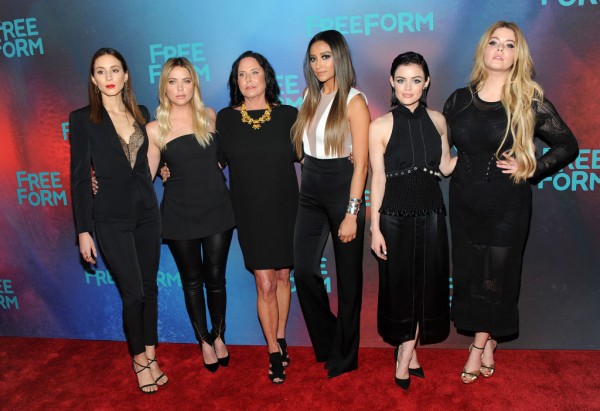 As a proud 2011 middle school survivor, I can say with confidence that everyone, including myself, was hooked on this show. We were hooked on this show for a long time. I remember sitting in English, thirteen years old, as the girl who sat diagonally in front of me told me the series was deviating from the books. I also remember, twenty years old, the summer after my Sophomore year, watching the final episode. Thirteen to twenty. THIRTEEN TO TWENTY. THOSE ARE FORMATIVE YEARS.

Of course it wasn't the only show that garnered our interest at that time. We all watched Glee, too. New Girl had just started up in 2011. Those shows, however, we've all rewatched. We've all tried to figure out how to play True American. We've let hindsight catch the many, many problems with Glee (though granted, maybe in-the-moment sight should have seen that one as well). 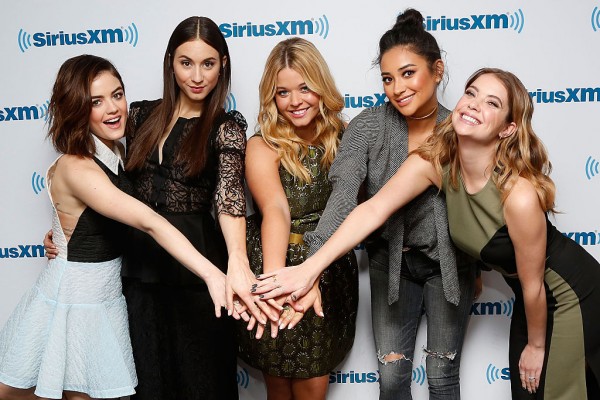 Recently, however, I've been filled with a strange, certainly sadistic urge to watch Pretty Little Liars again. I mean, it follows the natural course of the re-watch mentality. I feel like I should give it a try, right? I mean, it is on Netflix. However, this is not a show that anyone wants to watch alone, so I went looking for a re-watch buddy. That's when I discovered, oh...no one wants to re-watch this show at all.

It was a show that captivated and obsessed a generation. It's the show that taught us to look over our shoulders and trust no one. The show told us to block every unknown number. The show that brought every fear we had to light, showed us how it could possibly come to fruition, and left us with such a cliff-hanging lack of catharsis that even Brecht would be impressed. In a time when Glee was telling us our dreams could be a reality, Pretty Little Liars told us our nightmares could be, too. 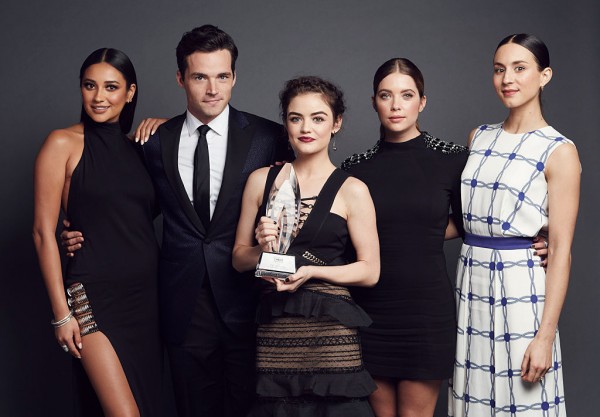 Here are eight reasons that Pretty Little Liars was so terrifying that it changed our collective core temperature and no one will rewatch it.

Yes, it is basic, but we may as well start at the beginning. The song immediately proclaims the promise of secrecy, lies, and death. The lyrics very plainly state, "Two can keep a secret if one of them is dead." Welp, glad to know that's going to be the modus operandi of the show. It means that secrets that are shared lead to a body count. The show does not mislead on that front. Furthermore, it tells us that any secret brought into the light, assuming you're not going to murder the person you tell it to (crazy, I know), will eventually come into the light. Moral of the story: trust no one. What a great lesson to walk away with.

2. So Many Dead Bodies

Most teen shows, especially in the early 2010s, talked about people dying. There would be high stakes, a risk that maybe something could happen, but, typically, nothing did. There would be a solution or a save or some way out of the danger. Pretty Little Liars did the important work of changing that. No character on that show was ever safe. It didn't matter whether you were a lead, side character, or background actor: you had the same chance at survival, and, ultimately, the odds were...eh. No one on the show was safe which means no one is safe which meant, from the comfort of your couch you realized, wow, I'm not safe either. If someone came and tried to kill me right now, I would die. Always a pleasant realization for a school night.

Yeah, people would "die", but would they really die? It really does a number on the faith you have in humanity and the universe when one week you're seeing a bloody corpse and the next that bloody corpse is back, very much alive, and quite possibly behind it all. FOR EXAMPLE, Allison, who is found dead in the first episode is then suddenly alive again and the prime suspect and is then definitely not a suspect and is their friend but then WHO GOT BURIED ALIVE IF IT WASN'T ALISON? ...why don't people want to relive this?

While we are on the trust-no-one train, I do not think there was a character on this show who was never a suspect. Aria was actually one of the main fan theories for a while (given she's the one that goes "shhh" during the theme song. And her name starts with A. And she was confusingly working for A for, like, five minutes...it's a complex show.) Ezra, who was a trustworthy guy most of the show, then turned out to have a secret lab where he was stalking all of them and writing a book about them. (I mean, I say trustworthy, but he was sleeping with a teenager the entire show...BUT THAT'S A DIFFERENT POST). Ultimately this show showed us that, no matter how long you've known a person, you can always find a reason to suspect them of being involved in your blackmail and torture.

The core four of the show were not just tortured psychologically. They were legitimately tortured in some of the worst ways any of us could imagine. They were nearly drowned, pushed to their death from towers, trapped inside enclosed spaces, buried alive. The show was nightmare fuel. In one episode, Spencer was trapped inside a steam shower when someone she didn't see locked her in, left a threatening message for her, and hacked the system, turning up the heat to 130. She would have died if Aria didn't come to save her. Like, I wasn't afraid of that before, but NOW I AM. Don't you just love when a show gives you new things to think about?

Sure, Snowden may get all of the credit, but Pretty Little Liars was the first show to tell us that any piece of technology you own can be hacked and manipulated from afar. With the skills of a well-equipped enemy, anything you own can spy on and torture you at a moment's notice. Every text you send can be used to blackmail you and every phone call can be tapped. This was SO FUN to realize AROUND THE SAME TIME THE IPHONE WAS CREATED. That being said, Pretty Little Liars showed us it didn't matter what we posted online. Our privacy is a facade. Everything you do is public, so post away. So that's nice...I guess...

7. You Can't Tell Anyone You're in Trouble

This was really the central conceit of the show (or at least a REALLY BIG PART). From the second the four girls started getting threatening text messages, they all decided I can't tell anyone. I understand that that's the point of blackmail, but at a certain point, the consequence of telling someone what's happening is better than being...I dunno...TORTURED? They refused to tell their parents. This one creepy police officer was convinced the ENTIRE TIME that they killed Alyson, so he was no help. Thank you Pretty Little Liars for teaching us Zillenials that if something scary is going on, keep it to yourself.

Congratulations. You made it. The most horrifying, life-altering, mindset-changing part of the show was without a doubt the dollhouse. Oh, I'm sorry. Have you suppressed this memory due to the life-changing fear it induced? Well, allow me to jog your memory. Aria, Spencer, Hanna, and Emily are taken by someone right before they are about to be wrongfully imprisoned. They are locked in an underground bunker that is filled with security cameras and made to look like replicas of their personal bedrooms. Mona is there (OH SURPRISE! SHE'S NOT DEAD) and is forced by whoever trapped them to pretend to be Alison. All of them are tortured in a variety of ways, such as covering Spencer in blood but wiping her memory so she doesn't know what she did or didn't do...you know, fun teen stuff! At least none of us are still messed up from this show, right? RIGHT?

So yes, that is why Pretty Little Liars was a horrifying, generation-defining show that doesn't make many people's re-watch lists. I must confess, within my time writing this article, I had a few fellow PLL vets say they would re-watch the show with me. I mean...it is almost Halloween. Maybe it's time to put myself through the psychological thriller ringer again.

Ashley Benson Breakup: The Real Reason She Split Up With G-Eazy, Revealed

Ashley Benson and G-Eazy have reportedly broken up after less than a year of dating.

Holly Marie Combs claimed that her grandfather is proof that Trump truly did make that grave error.

'Pretty Little Liars' star Sasha Pieterse wed long-time beau Hudson Sheaffer in a romantic ceremony over the weekend. The young couple tied the knot in a castle in Ireland.

Lucy Hale Opens Up About Sex Scene In 'Truth Or Dare': 'Sex Scenes Are Never Sexy'

'Pretty Little Liars' star Lucy Hale opened up about her 'awkward' sex scene with her co-star, Tyler Posey, in the film 'Truth or Dare.' The horror film hits theaters on April 13, 2018.

Actress Lucy Hale recently posted a cryptic message on her Twitter account which may indicate the actress was sexually assaulted. Fans have shown their love and support for Hale after she removed the post from her account.

Sasha Pieterse of Freeform's 'Pretty Little Liars' is unapolgetic about her weight gain despite being body shamed for it.

This year, American teen drama thriller, "Pretty Little Liars", will be approaching the end of its season and the series finale as well. However, it has been speculated that a spin-off from the series will follow, which excites the fans and viewers of the drama series.