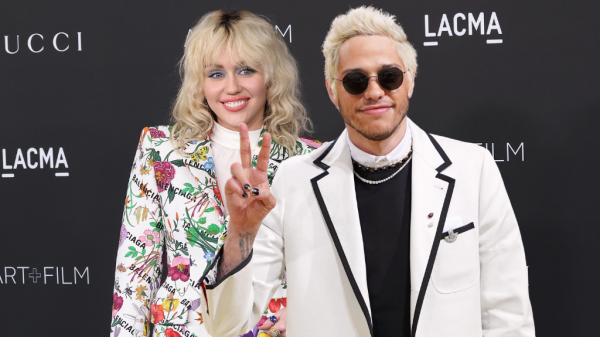 Carson Daly is OUT, Miley Cyrus is IN - this year, NBC is trying out a brand new vibe for their New Year's Eve party, with two big stars heading it off. Pete Davidson will assist Miley Cyrus in hosting Miley's New Years' Eve Party on NBC this year.

This special directly competes with the ever-famous Dick Clark's New Year's Rockin' Eve, which is now hosted by Ryan Seacrest. It also replaces the previous iteration, which has aired on the network since 2004. Lorne Michaels, creator of SNL, is behind it. (We'd say this explains Pete Davidson's presence, since Michaels is known to be fond of the guy, but these days his presence anywhere kind of speaks for itself.)

"In what is sure to be an exciting and fun evening, we are looking forward to partnering with Lorne Michaels and ringing in 2022 with a night of incredible entertainment, led by Miley and Pete." Said Jen Neal, a VP and representative for NBCUniversal.

Tags: Miley Cyrus Pete Davidson Ryan Seacrest Carson Daly
© 2022 EnStars.com All rights reserved. Do not reproduce without permission.
Most Popular
You May Also Like

Seeing Double!! Celebrities React to Their Impersonators in the Most ICONIC Ways!

Here are eight of the top celebrity reactions to impersonations of themselves.

Motivating Malfunctions! How Miley Cyrus's New Year's Eve Shirt Slip Showed Us Everything We Need to Take On 2022!

Miley Cyrus just had the most inspiring wardrobe malfunction of all time.

WHOA! Miley Cyrus Top Falls Off On Live Television!! In True Rock Star Fashion She Shows Us the Most Graceful Wardrobe Malfunction of ALL TIME!

A party's not a party without a wardrobe malfunction!

Kim Kardashian and Pete Davidson's romance continues to thrill fans, but one report suggests there's something going on behind closed doors as Miley Cyrus is flirting with the comedian driving the reality star furious; could this be true?

It has quickly become an even hotter ticket as Brandi Carlile, Jack Harlow, Saweetie, Anitta, 24kGoldn, and Kitty Ca$h get added to the unforgettable roaster of talents to perform at end-of-year celebration.

Rumor has it that Kim Kardashian is allegedly jealous of new boyfriend Pete Davidson and Miley Cyrus's showbiz tandem over a recent Instagram post.

Actually to be more accurate, she sang it to him, with her leg draped over his lap for emphasis. Jimmy Fallon loved every second of it.

It appears that Cyrus was performing a musical number at one point, for which she changed into a gorgeous off-the-shoulder black dress with abstract cutouts. Davidson, meanwhile, looked dapper in a full suit.