People have been going absolutely wild about Pete Davidson's dating history for weeks, especially after today, when paparazzi photos of Pete proudly sporting a hickey - no doubt given to him by his new girlfriend Kim Kardashian - surfaced online.

Love at first bite! SNL star Pete sports a huge hickey on his neck as he steps out with Kim

The incredulous cries were just funny at first, because admittedly, the pairups Pete has been involved in have been somewhat odd ones, just because they don't look like many conventional couples, and because comedians haven't historically been given the same kind of high-profile status in society as reality stars like Kim K (or actresses from hit shows like Phoebe Dynevor, or pop giants like Ariana Grande...).

Honestly, this relationship is a lot like Megan Fox and Machine Gun Kelly: It looks weird at first, this celebrity who is literally famous for being beautiful paired off witht his edgy, alt-looking dude, but it's actually pretty run-of-the-mill. Hot and powerful woman with the world's weight on her shoulders with a goofy, edgy guy is a tale as old as time.

Even still, though, it's now becoming clear that there are people out there asking these questions, not just as a form of hyperbole, but genuinely: "How DOES he do it?!"

Well, as someone who is verifiably attracted to Pete Davidson, I can explain - but I'll warn you guys, this is not going to be a list of "tips you can use to get girls who are out of your league." That's because...

What Pete Is Doing Isn't Because He's Got "Moves"

Pete Davidson is not a man who has strategies on how to "get women." He's himself, all the time, no matter who he is talking to - it's kind of part of his brand. Everyone likes someone genuine. That one's a no-brainer.

Even Jessica Rabbit agrees: A woman loves a man who can make her laugh. Pete Davidson is literally a professional comedian, and the best part of his comedy is (see bullet point #1) that it's all just him being himself. He doesn't tell "jokes;" the way he talks and looks at the world is simply novel and interesting.

If you're not familiar with the term neurotypical: It's the opposite of neurodivergent, a psychological term that refers to those who have a mental disorder that causes them to think differently than others, like ADHD, ASD, Bipolar Disorder, or BPD.

Pete Davidson has BPD, which means that he doesn't see things the same way others do - and as a general rule, that also includes the laws of attraction. Neurodivergent people are known for finding each other and creating unusual pairings that neurotypical people aren't used to seeing - even if they don't actually know they're neurodivergent. (And they're also known for having a propensity towards the arts.) Thes hot actresses he's dating might be more like him than they seem.

BPD, or Borderline Personality Disorder, is characterized by a number of traits, chiefest among them being emotional intensity and fear of abandonment. In relationships, this often means that the BPD person's partner ends up showered in love and affection, receiving all of their partner's attention for a time. Davidson himself has recognized this inclination of his, once telling PAPER Magazine:

It also, sadly, kind of explains why Pete seems to keep dating women on the rebound - if she's getting out of an unfulfilling or taxing relationship, being treated like a princess by a guy who's happy to do it probably sounds pretty good.

Hold your horses on congratulating him, though, because this "method" is far from fool-proof and can often turn stale:

"Sometimes when you put so much on someone, it overwhelms them, and then they don't know if they could come close to that. Or if they can keep up with it, so it's very off-putting to some."

Additionally, there is a flip side to this romantic intensity that comes with BPD, because that door swings both ways: The fear of abandonment can sometimes lead the BPD person to isolate themselves if they think they might be hurt in any way, which can put strain on or even break the relationship, as can the other symptoms of the disorder - which could also explain why there have been so MANY hot girlfriends in pics with Pete.

Davidson makes it no secret that he's a traumatized individual - his mental and physical health concerns aside (he also suffers from Chron's Disease), his father died on 9/11 when he was just eight years old, and he's had to deal with years of the spotlight on him. That alone is enough to change you as a person - and other celebrities, especially beautiful actresses and other high-profile women who are hounded by the press, have usually been changed in similar ways.

He's actually vulnerable with his emotions.

I don't know how many times I have to repeat it, but guys, women LIKE when you can be emotional with them. We like when you know how to access those - and we'd actually prefer if WE are not the only ones you do it with.

Pete Davidson proves that every time he walks onstage - he talks about his pain and struggles openly, and does it with a smile that tells a potential partner that, even if he hasn't quite made his peace with them, they're not going to surprise her, and she won't be the entire support system for them.

You can disagree all you want, everyone has different taste, but personally, I am SO INTO that skinny-dude-messy-hair-tattoos look. They used to call it grunge, I think, I don't know what to call it now - but Messy is definitely its Own Look.

Also, and I can't believe nobody is saying this, but he IS really cute! He's tall, he has a kind of angular face, a great jawline, and a really sweet smile. He honestly looks a lot like Andy Samberg, and we've all been watching THAT glo-up - look! 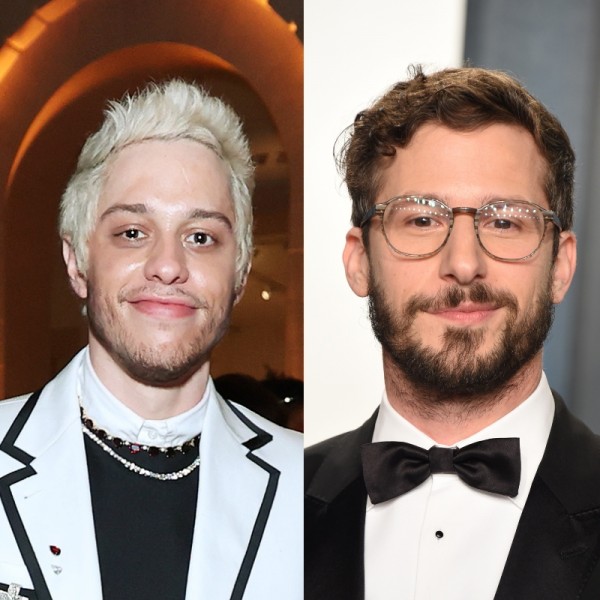 Pete Davidson always seems like he's up for a good time or a random adventure, and who doesn't want that kind of spontaneity in their life? It's clear in every interaction we've seen in his relationships that he makes his partner and his relationship a priority in his life - and he puts out such a laid-back persona that it's easy to forget that he has a job, let alone that he's one of the most popular comedians of the decade.

Last but not least - he IS one of the most popular comedians of the decade.

Maybe that's all it takes, folks.

Kanye West is said to believe that only Kim Kardashian is capable of putting up with him.

Does Kim Kardashian have a secret anger towards her estranged husband Kanye West?

Carson Daly is OUT, Miley Cyrus is IN - and so is Pete Davidson! This year, NBC is trying out a brand new vibe for their New Year's Eve party.

Despite reports that Kim Kardashian and Pete Davidson are dating, Kanye West, Kim's estranged husband, isn't giving up on their marriage anytime soon.

Pete Davidson Getting Banned From 'SNL' Because of Kim Kardashian? Other Cast Members Are Not Happy Because of THIS

Is Pete Davidson on the verge of being fired or banned from "Saturday Night Live"?

Fans Disappointed At Kim Kardashian After Pete Davidson Was Spotted With This SHOCKING Mark: 'So Gross'

Kim Kardashian and Pete Davidson were out on a dinner date again, but many fans are not happy with their recent interaction; what happened?

Many people are still surprised that Kim Kardashian and Pete Davidson are dating.

Kim Kardashian Triggered By Kourtney and Travis Barker's Relationship? Reason Why She Is With Pete Davidson Revealed

Is Kim Kardashian dating Pete Davidson because she aspires to have the same type of love her sister has for her fiancé?