If you've been on Twitter today peeping at the trends, you probably noticed this absolutely heart-melting story about the unexpected friendship between Jim Carrey and The Weeknd:

Abel and Jim Carrey got the most wholesome first meeting ever🤧 pic.twitter.com/Vzj97Om8GY

Well, Carrey may be known for playing kooky characters, but he's so much more than that: This man is a comedian, an actor, a painter, a gifted orator, and possibly one of the wisest human beings on the planet. He's also had what is undeniably one of the most fun acting careers in history.

Here are eight other Very Cool Jim Carrey Things that show what a Renaissance Man he truly is:

He recorded a rap with Busta Rhymes once:

He recorded the song for The Grinch soundtrack, and he performed it as the Grinch himself. You can tell when you hear them laughing together at the end that they had a lot of fun together in the studio, too. Also, the song is damn catchy.

He needed color in his life, so he became a painter

Carrey agreed to be the subject of a documentary about his journey into becoming an artist in 2017, and the things he has to say about art, what it does, and what it is for are truly moving and inspiring. His paintings are also beautiful, to boot.

Speaking of his paintings, he also gave the most wise graduation speech ever, using one of them to illustrate:

Just. Just listen to it. Everyone needs to hear this.

I'm not crying. You're crying.

ALSO speaking of his art, one time he pissed off Mussolini's granddaughter

You are a bastard

On top of everything else, Jim Carrey also dabbles in political cartoons, and one particular political cartoon he drew in 2019 criticizing facism by depicting Mussolini's death earned a few pointed barbs from his granddaughter Alessandra, who called him a "bastard" and referred to the cartoon as "dirty paper."

Pissing off the facist granddaughter of one of the most infamous dictators in the world? He must be doing something right.

He was the lead white cast member of In Living Color, widely referred to as 'the Black SNL'

He wasn't afraid to be the butt of the joke or make fun of white people, no matter who got butthurt about it - and back then, there were even more butthurt people than there are now, if you can imagine that.

Also, Fire Marshall Bill is a character that deserves immortality.

He wrote a children's book 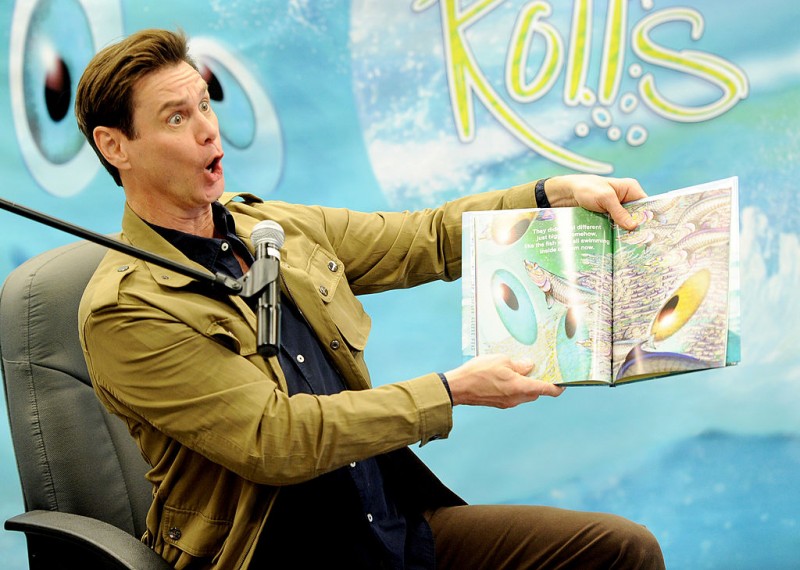 "A story about a wave named Roland who's afraid that, one day, when he hits the beach, his life will be over. But when he gets deep, he's struck by the notion that he's not just a wave - he's the whole big, wide ocean! The story shows humanity's interconnectedness through the metaphor of a wave in the ocean."

Once again: I'm not crying. You're crying.

Oh, also, he wrote a novel too

After the success of his picture book, Carrey apparently decided "why not?" and decided to write a whole novel. Memoirs and Misinformation, co-authored by Dana Vachon, was published in 2020.

It's a semi-autobiographical story that...uh...you know, we'd better just let the Goodreads synopsis do the talking:

Meet Jim Carrey. Sure, he's an insanely successful and beloved movie star drowning in wealth and privilege--but he's also lonely. Maybe past his prime. Maybe even . . . getting fat? He's tried diets, gurus, and cuddling with his military-grade Israeli guard dogs, but nothing seems to lift the cloud of emptiness and ennui. Even the sage advice of his best friend, actor and dinosaur skull collector Nicolas Cage, isn't enough to pull Carrey out of his slump.

But then Jim meets Georgie: ruthless ingenue, love of his life. And with the help of auteur screenwriter Charlie Kaufman, he has a role to play in a boundary-pushing new picture that may help him uncover a whole new side to himself--finally, his Oscar vehicle! Things are looking up!

But the universe has other plans.

Memoirs and Misinformation is a fearless semi-autobiographical novel, a deconstruction of persona. In it, Jim Carrey and Dana Vachon have fashioned a story about acting, Hollywood, agents, celebrity, privilege, friendship, romance, addiction to relevance, fear of personal erasure, our "one big soul," Canada, and a cataclysmic ending of the world--apocalypses within and without.

The phrase "addiction to relevance" on its own is kind of brilliant.

He was once on a Canadian postage stamp

I’m on a stamp along side all my Canadian comedy heroes! This is big. I feel like the guy who invented poutine! ;^D pic.twitter.com/N6V28NxX4P

This makes more sense when you find out he's from Canada. (Which I did not know before today either.)

The limited-edition stamps bearing Carrey's face were available in 2014, alongside stamps featuring Martin Short, Catherine O'Hara, Mike Meyers, and Oliver Guimond. (If you want to get a pack now, you'll have to try your luck on eBay.) If reading this made your heart a little lighter, you should definitely follow his twitter account. He's on there spreading positivity all the time.

Every human being is, at the very least, a masterpiece in need of restoration. May we all be lovingly restored in 2022 and able to see each other in a better light.  ;^} pic.twitter.com/PokShxOPR0

Tags: Jim Carrey The Weeknd Busta Rhymes Mussolini
© 2022 EnStars.com All rights reserved. Do not reproduce without permission.
Most Popular
You May Also Like

No, sadly, Jim Carrey's Ace Ventura is not going to come in during the next season of 'Tiger King' and sue all offending parties for mistreatment of animals - awesome as that would be.

Grinch Wars: Jim Carrey's Grinch May Not Have Been The Grinch We Deserved, But He Was The One We Needed in 2000

The veriosn of 'How The Grinch Stole Christmas' that came out in 2000 didn't do a bad job translating the plot from the original - but they did purposefully distort Whoville to play to a young Millennial audience, and for a very good reason.

From Hedgehog to Rat Pack: Ben Schwartz To Play A Mobster Alongside Nicolas Cage's Dracula In Upcoming Vampire Flick Renfield

if it wasn't certain before that Chris McKay's upcoming monster movie Renfield was a comedy, it is now: With Ben Schwartz AND Awkwafina on the cast list, it HAS to be.

All Of Twitter Agrees: Idris Elba's Knuckles Will Be Sexy Whether He Likes It Or Not

Jim Carrey turned himself into a "Tinseltown reject" who is always not invited to massive and luxurious Hollywood parties.