After a two and a half year wait, the stellar, modern staple girl-squad show Dollface is coming back with a season two, and the official trailer is finally here! The show, starring Kat Dennings, Brenda Song, Esther Povitsky, and Shay Mitchell, starts with Jules, played by Dennings, gets dumped by her boyfriend and is then driven to rejoin the infinately complex terrain of female friendships. Now, in season two, the group must now deal with the added complications of the pandemic, their 30s, and, of course, their romantic lives. Madison, played by Song, says in the trailer, "We spent the last part of our official youth stuck inside, just here, watering houseplants." If that isn't already an overwhelming dose of RELATABLE, we don't know what is.

Dollface is Sex and the City for the 21st century twenty-somethings and thirty-somethings. The world has changed, the modern dating landscapeodern bears the simplicity of a rubix cube, and the bonds of female friendship tighter than ever. It is a show created to be real and relatable. 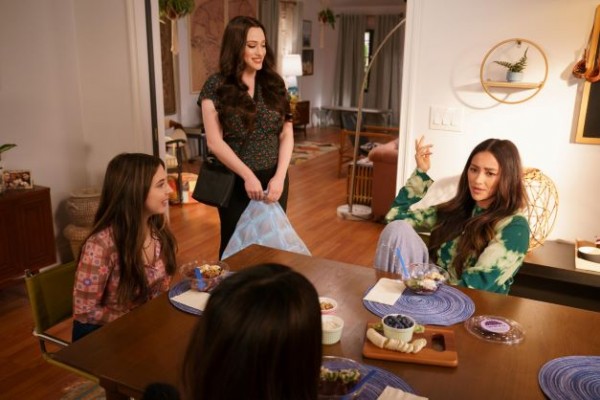 Dennings is aware that the character she plays is one that many can see themselves in. In an interview with InStyle back in 2019 in which she posed the incredibly true question, "Don't we all relate to the sad emo character?" She went on to explian, "I am attracted to roles I feel like I can bring a real aspect to, you know, like I can actually draw from something. I've had a storied love life and a somewhat interesting upbringing, so I feel like I relate to those characters." Dollface is relatable and real. (Well, as real as a TV show can be with a CGI cat head and girl-stressor manifestations of a Sherlock Holmes style mind palace!)

Tags: Kat Dennings Brenda Song shay mitchell Esther Povitsky Dollface
© 2022 EnStars.com All rights reserved. Do not reproduce without permission.
Most Popular
You May Also Like

Kat Dennings, Andrew W.K. ENGAGED -- But What Happened To His Wife Cherie Lily?

Kat Dennings and Andrew W.K. have shocked the world for the second time this month after announcing their engagement. But many have been wondering - isn't Andrew W.K. still married to Cherie Lily?

Every Marvel character deserves their own spinoff, and fans could not wait to see one that features Jimmy Woo!

While they certainly aren't the only surprising Hollywood romance, 2 Broke Girls actress Kat Dennings and singer Josh Groban are one of the newest to cause fans to scratch their heads.

2 Broke Girls stars Kat Dennings and Beth Behrs revealed what they hope will happen on the show this year.

Kat Dennings revealed that she secretly went out on a date with Canadian rapper Drake after being by bashed by his fans on Twitter. Watch the video

It appears as though Mad Men's Christina Hendricks has some competition in the cleavage department, and it is coming from a 26 year-old self-proclaimed "weirdo" by the name of Kat Dennings. The Two Broke Girl's star recently attended the Television Critics Association summer press tour in Los Angeles yesterday.