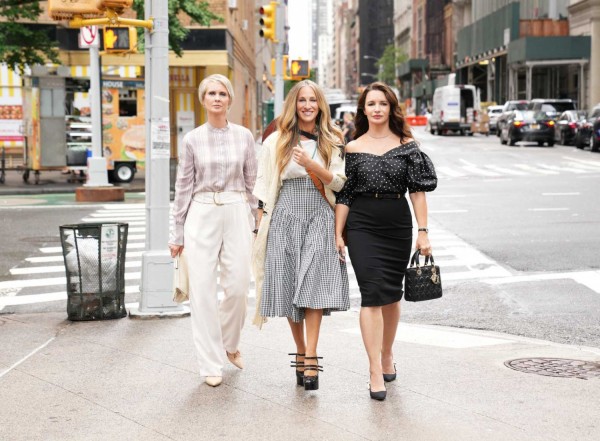 A new year is upon us. The entertainment slate has been wiped clean, and we wait, filled with anticipation, to see what new shows and movies you have in store for us. Listen, I trust you, but before you start, I just have one, tiny, small, miniscule thing I would love to caution you against.

Reboot culture is at an absolute all-time high. From the Gossip Girl reboot to And Just Like That..., there is a fascination (a fascination I hope we will be leaving with 2021) with taking shows that have been off the air for ten or more years and trying to reignite the story for a modern audience. While the obvious ease that a production company can turn a profit off of a previously established fan base is tempting, the creation of a reboot falls in line with the old saying: if something seems too easy, it probably is.

While the allure of the reboot can be striking, the countless pitfalls that mar the path to a successful show, that are seemingly unmissable by reboots of recent history, further the point that making a new show would be a far more productive avenue.

The reboot of Gossip Girl is so immensely different from the original show that it should not have borne the same name. In fact, for the sake of minimizing confusion in the upcoming paragraph, it will hereafter be referred to as Rumor Boy. I am not speaking to the quality of Rumor Boy as a program. It is a show filled with talented actors such as Tavi Gevinson, Emily Alyn Lind, Whitney Peak, Jordan Alexander, and Thomas Doherty. The styles are scintillating and the script is suspense filled; however, it's not Gossip Girl.

The only things the two shows have in common are the school they go to and the amount of money the teenagers come from. The same school doesn't mean the shows are set in the same world. Gossip Girl was about old money New York. It focused on cliques, socialite status, and the pressure cooker pressures that came from families holding up an old timey essence of decorum. Rumor Boy focuses on the modern world: the power of TikTok, the music industry, the culture of new money, the political environment. Even the show's titular narrator serves a different purpose. In Gossip Girl, Gossip Girl was little more than an ethereal, external presence until the later seasons. It then transformed into an avenue for inclusion into the upper echelon of New Your high society. In Rumor Boy, Gossip Girl is weaponized, instantly used as a tool to create drama to put the high schoolers in line.

The first Gossip Girl narration was a reporter. This Gossip Girl is an agent of chaos. Both are interesting concepts. Both are things I would watch separately; so, why do they both have to be Gossip Girl? The setting does not make the story. There is more than enough room for a television show that is not actually Gossip Girl about wealthy teens in New York City. Furthermore, by calling them both Gossip Girl, the viewer has no choice but to put the two shows in direct comparison with each other: this is different, why aren't they doing that, that's not how they did it last time. If they had called the new show anything other than Gossip Girl, it would have been a liberating experience, allowing the audience to watch with fresh and unbiased eyes.

PITFALL #2: TRYING TOO HARD TO USE THE ORIGINAL SHOW

While this pitfall may seem like it is in direct contradiction with pitfall #1, it is in fact a unique and equally tricky problem. And Just Like That... has the opposite problem than Rumor Boy. While Rumor Boy bears the same name of the old show while having an entirely new cast of characters with a cameo or joke from time to time about Gossip Girl, And Just Like That...features nearly the same cast of characters, burdening themselves with the unique problem of remaining true to the original characters while giving them new, modern problems. Sex and the City was about a friend group of women in their 30s, trying to find love. With And Just Like That... we return to these women in their 50s.

Would I love to watch a story about a friend group of women in their 50s, figuring out the world. I agree that it is a group of people that needs more representation in the media. However, the storylines of Carrie, Miranda, and Charlotte were pretty much settled after the closure of Sex and the City. That is not to say that new challenges do not present themselves as life goes on (they DEFINITELY do), but by rebooting the show, the writers were given the challenge of finding creative ways to untie knots to create new stories, sometimes clashing in the confusion. Had the show been completely untethered from Sex and the City, And Just Like That... would have had far more freedom to explore more newer avenues.

If the story being followed is ultimately unique, why not create three new characters unter a new show? Why not have a group of women named Martha, Julia, and Brenda! I'd watch it (and I mean, yes I am also watching And Just Like That...)? Martha, Julia, and Brenda could explore the same plights as Carrie, Charlotte, and Miranda, but the writers would be free to give the actors a rich, deep characterization rather than trying to layer new problems and complexities on already established characters.

The sub-issue that this pit-fall presents is that, as Sex and the City was such a phenomeonon, people have A LOT of opinions on the characters. Even today, friend groups that weren't even alive in the 90s are allocating who is the Carrie, Charlotte, Miranda, and Samantha of the group. In order for the show to continue, the characters need to grow and change. If the characters stray too far from where people originally held them to their hearts, the result will be (admittedly ridiculous) anger. The new challenges and characterizations may be brilliant, but if they wander too far from the basis of the fandom, it will all fall apart. Now, if these characters were in a NEW show facing NEW challenges, this anger is not even a problem.

It makes sense. If The Office made a return, every Office fan in the world would come flocking back to the show. If New Girl made a return, apartment 4D stans everywhere would be excited to see their favorite characters return. I recognize I have used the word "return" five MILLION times. That is very intentional.

Every time a writer makes a (fully-entitled-to-literally-their-job) choice, an OG fan is angry. With Rumor Boy you hear cries of "Why isn't Gossip Girl calling them 'Upper East Siders'" With And Just Like That... there are lamentations of, "Why isn't Carrie narrating?" Any creative choice made outside of the guidelines of what the original show was like will cause an unquestionable uproar from the-marketable-reason-you-made-this-show fan base. The way to get the best of both worlds? MAKE. A. NEW. SHOW.

Sex and the City fans would FLOCK to a show that was, "like Sex and the City but older with more drama." High schoolers today would find their home with a, "show like Gossip Girl but for the modern day teen." A viewer can far more easily get over the striking similarity between a new show and their favorite show than what they feel may be a twisted future for something they felt was perfect. In fact, they may even PRAISE the new but similar show, but creating a new show under the at-least-we-can-count-on-the-old-fans-if-we-link-it-to-their-favorite-show ideology is flawed. In fact, you are more likely to get true fans boycotting the new show than you will have them loving it.

I'm really not bashing these rebooted shows. At all. If anything, I'm fighting to give them a fair chance! I'm simply stating that I think both And Just Like That... and Rumor Boy and most (not all, but most) other reboots would stand a more fighting chance if they were created as entirely new shows OR EVEN as a spin-off. Spin-offs are fun and don't hold the same pressures as a reboot. Overall, good luck 2022. We wish you well (heed our warning!)

Tags: gossip girl And Just Like That... Sex And The City
© 2022 EnStars.com All rights reserved. Do not reproduce without permission.
Most Popular
You May Also Like

THE BOYS ARE BACK! Amazon Prime Announces Release Date for Season 3 of Hit Show 'The Boys'

"The boys are back!" (Don't you love when you get to easily quote High School Musical 3?)

Enough Already! Why Does Every Sitcom From 'The Office' To 'New Girl' Have A Quirky Wedding Episode? Please Stop! It's Exhausting

It really does happen in just about every sit-com, and I am over it. Here are eight shows I absolutely love that had quirky wedding episodes which just make us ask why?

Savannah Smith dropped a critical detail about her character on the "Gossip Girl" reboot after its arrival on HBO Max.

At the height of his scandalous controversy, Armie Hammer dropped out from his role in the upcoming film "Shotgun Wedding."

Ryan Reynolds, his wife Blake Lively and their kids will be spending Christmas a little different this 2020.

Netflix 2021: 5 Epic Shows You Should Watch Now Before They Leave in January

While there are a lot of movies and shows coming to Netflix this January 2021, a lot are also getting pulled out.