Horror/Thriller director Ti West has teamed up with A24 to make X, a throwback slasher that reads like Boogie Nights meets The Texas Chainsaw Massacre.

Known for his definitive film look which often harkens back to the horror flicks of the 70s and 80s, Ti West is a master at making films which have a grainy, old school look and feel. His past movies The Inn Keepers and The House of the Devil, have all of the earmarks of pictures shot in eras past, with their grindhouse look and feel. 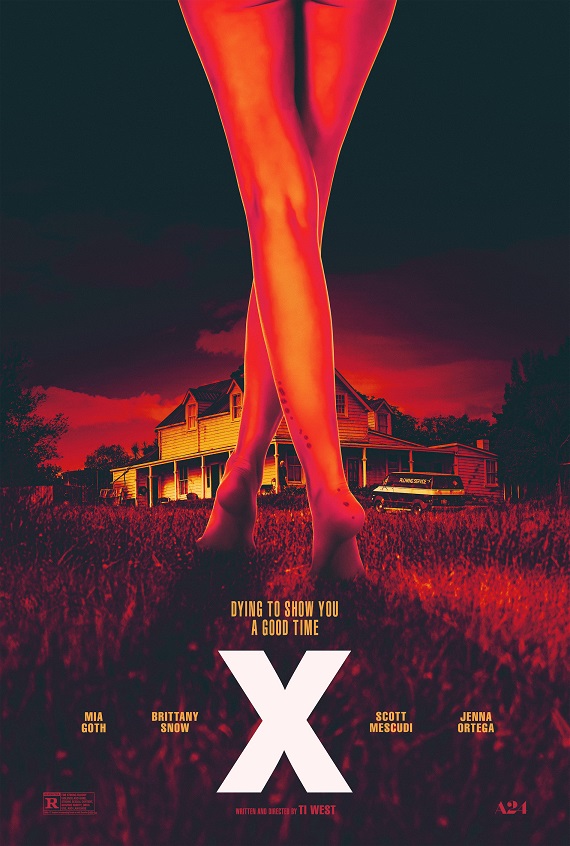 In the trailer, dropped this week, X promises more of the trademark film-making West strives for. The synopsis is thus,

In 1979, a group of young filmmakers set out to make an adult film in rural Texas, but when their reclusive, elderly hosts catch them in the act, the cast find themselves fighting for their lives.

In the trailer, we meet the cast of characters which includes Jenna Ortega, Kid Cudi, Brittany Snow, Mia Goth, Martin Henderson, Owen Campbell, and Stephen Ure. What follows is a creepy, darkly funny, splatterfest for the senses. The gang find themselves looking for lodging and a place to shoot their film, which ends up being an eerie old man and his equally odd wife, who let them stay at their farm in the middle of nowhere. Soon, the couple begin to lurk around the background of the night shoots, popping in and out of frame, being genuinely freaky. Terrified, the crew begin to question the couple's intent, though the trailer keeps the twists and turns close to the chest.

This looks to be a return to form for West, who has not made a film since In The Valley of Violence in 2016. He has been working mainly in television directing shows like Wayward Pines and Tales From The Loop. It is great to see him getting back to what he does so well, making original and interesting horror films with the veneer of the generation that established the slasher genre.