In this highly secretive season of FX's American Horror Story, could we be seeing the return of a fan favorite actress in one of the later episodes?

As fans of American Horror Story continue to speculate about the twists to come on the current season, now subtitled Roanoke, many are hoping this rumor comes true. There is a credit on IMDb under this season's ninth episode that indicates a rather popular actress from early-American Horror Story is returning, and that actress is Taissa Farmiga.

The Episode 9 page for American Horror Story: Roanoke says that stunt woman Talia K. Dillingham is set to be the stunt double for Farmiga in this episode, indicating the actress' appearance in this season. Of course, this should be taken with a huge grain of salt considering anyone with an account can edit IMDb, but it's a very specific easter egg even if it ends up being a hoax.

Farmiga hasn't been on American Horror Story since the show's third season, Coven, where she played teen witch Zoe Benson. She previously played the very twisted and complicated Violet Harmon in Murder House, a role that essentially put the actress on the map.

With news of a huge twist to come in episode 6 of Roanoke combined with the fan theory that this season will interconnect with past seasons like never before, it's not totally outside the realm of possibility that we could see a Farmiga return.

"You'll see starting in episode 6, the show has a huge turn and the thing that you think you're watching is not what you're watching," executive producer Ryan Murphy told Entertainment Weekly, of Roanoke.

Fellow executive producer Brad Falchuk said that the season has separate arcs, noting, "It's like [episodes] 1-5, 6-9, and 10 is its own thing." He added, "Even though the subject matter has gotten out, it's irrelevant because nobody gets what we're doing. No matter what you think it is, it's not that. Then, episode 6 comes and you're like, 'Wait! What happened?'" 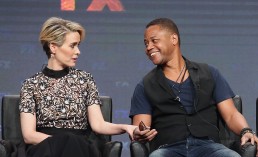