Roadside security footage of robbers reportedly involved in Kim Kardashian's jewelry robbery has surfaced. The video shows a group of attackers approaching and then fleeing her Parisian apartment.

According to TMZ, the video shows five individuals, three on bicycles and two on foot, heading in the direction of Hôtel de Pourtalès at 2:18 a.m. on Oct. 3. The attackers are seen 49 minutes later, absconding from Kardashian's luxury apartment. A bag can be seen on the front of one bicycle.

Kardashian told the police that she was tied up, threatened with a gun and robbed of millions of dollars worth of jewelry by armed and masked assailants.

French police has not revealed any other details of the robbers and denied that if they have any leads on the perpetrators.

"Kim" Kardashian West is an American reality television personality, socialite, businesswoman and model. "She is disturbed after being bound, gagged and robbed at gunpoint in her Paris hotel room Sunday night" E! News reposts.

The masked gunman has robbed of $11 million worth of jewelry that includes nearly $7 million as well as a ring worth $4.5 million from her.

Interestingly, the robbers could not take all her jewelry or one of the robbers deleberaty dropped one piece of jewel. According to US Magazine, "One of the robbers fell off of a bike while another made it look like he accidentally dropped a dismond cross pendant from Jacob and Co. worth $33000, as the five men got away." Why did they do so? Why would they leave one piese of jewel? Do they want to fool police?

The "Keeping Up With the Kardashians" star who is still in shock, told authorities that the five robbers, who appeared to be middle-aged, Caucasian men of European descent have tied her and throw her in bathtub and taken all her jewels . Let's hope police catches the thieves and she gets all her valuables.

Kardashian's husband, Kanye West was in New York at the time of the robbery and he rushed back to Kim leaving the Meadows Music & Arts Festival in the mid, citing a "family emergency." 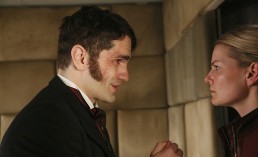 "Once Upon a Time" recap: 'Street Rats'