One year after the success of Dolly Parton's Coat of Many Colors, the country music icon has another special movie just in time for this year's holiday season. Like the first film, Dolly Parton's Christmas of Many Colors: Circle of Love centers on a young Parton (Alyvia Alyn Lind) growing up in rural Tennessee.

"The film delivers Christmas joy and peril as an unexpected blizzard threatens the Parton family, while at the same time Dolly's father (and his kids) make sacrifices to raise enough money to finally buy his loving wife the wedding ring he could never afford to give her," says NBC. "Meanwhile, an important person in little Dolly's life begins to see that her amazing voice and musical gift might just be made for something bigger than rural Tennessee."

Dolly Parton's Christmas of Many Colors: Circle of Love airs at 9/8c on NBC. If you are not able to watch the TV movie on television but still want to see it live, check out NBC's live stream. You can also try a free seven-day trial of Sling TV, which comes with NBC. Be sure to choose the Sling Blue option.

Last year, Dolly Parton's Coat of Many Colors was watched by 16 million viewers - an impressive feat in 2016. Dolly herself was amazed by the ratings.

"I was so overwhelmed and touched by how many people watched 'Coat of Many Colors' and their reaction to it," she said. "The song 'Coat of Many Colors,' of course, has always been my favorite and has touched so many people through the years, especially me. It is a true story from a very special time in my childhood. I am so happy to share this story with the viewers and to say there is so much more to tell because mine truly has been a life of many colors. I hope the viewers will fall in love all over again."

Dolly Parton 2015: Country Singer Opens Up About Her Roots & How She Made It On Top [VIDEO] 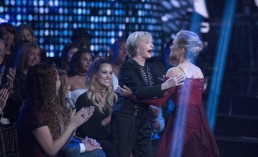