Apparently, Bryan Abasolo might be making too good of an impression on ABC's The Bachelorette.

In a teaser for the upcoming episode, Rachel Lindsay has a major concern after one of their dates.

"He is such a catch. He is such an amazing person - and that's the part that scares me," she said. "I don't understand why he's still single. This is why I think Bryan is too good to be true."

Interestingly enough, her moment of a possible awakening came after what could have been a perfect date as he expressed concerns of his own.

"It was eerily similar to what we have going on," he said of his most recent relationship. "It was passionate and hot and heavy in a short amount time. Looking back on it, it was maybe a little too much, too early. Hence my fear a little bit of what we have going on. That's why I'm scared going into [hometown dates] next week. The last time I introduced somebody I felt as strongly for, we broke up shortly thereafter."

He added that history could be repeating itself.

"Literally this could happen again. It's something that's in the back of my mind and scares me a little bit."

Abasolo has been a frontrunner in the battle for Lindsay's love and affection since the first episode of the season. He actually received the First Impression Rose after the two shared a passionate kiss shortly after meeting one another.

"Meeting somebody's family is very, very serious. I feel like I need to understand him more and where he comes from, what his family is like, what they're going to think of me and will they be accepting of me. I have some important questions before I can hand out that rose," Lindsay said. 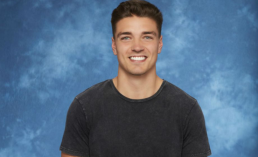 'The Bachelorette' Season 13: Dean, Peter And Bryan Are The Latest To Get Caught Up In Drama [VIDEO]