For the fans who have binged watched the second season of Stranger Things and wanted more will be happy to know that the original Netflix series has been renewed for a third season.

While a release date hasn't been confirmed, it's nice to know that there will be more episodes coming to Netflix. Hopefully, more than nine this time. But that's just wishful thinking. However, the Duffer Brothers gave The Hollywood Reporter, some insight as to what fans can expect when season three picks up.

"Our kids are aging. We can only write and produce the show so fast," Matt Duffer explained.

Even though the show would be nothing without the six members of the "party," this is a problem that franchises face with young actors.

"They're going to be almost a year older by the time we start shooting season three," Matt Duffer added.

The Game of Thrones cast faced this problem, when producers decided to recast the actor for Joffrey's younger brother Tommen. Tommen was first played by Callum Wharry, but was later replaced by teenager Dean Charles Chapman.

With everyone relying on specific characters in Stranger Things, fans definitely wouldn't respond too positively to any re-castings. But luckily, the Duffers aren't considering replacing anyone at the moment. So no need to fret, everyone that you know and love from season one and two will definitely be returning in season three.

But one thing's for sure, is that Bob the Brain definitely won't be back. The only difference will be a time jump.

"That's what I'm excited about. It's a long way of saying that yeah, we're going to do a time jump," Matt Duffer said.

Where the time jump will take place, hasn't been answered. But what has definitely raised a lot of questions is the giant shadow monster that appeared over Hawkins Middle School in the season two finale. Stranger Things was created by the Duffer Brothers, Matt and Ross Duffer. The hit show offered viewers their first trip to the Upside Down when the series premiered in July 2016. The supernatural coming-of-age drama has become Netflix's most popular series. Particularly after Kevin Spacey's alleged sexual misconduct threw House of Cards into chaos.

Stranger Things received the 2017 SAG Award for Outstanding Performance by an ensemble in a drama series. According to the Duffer Brothers, young stars, Finn Wolfhard, Millie Bobby Brown, Gaten Matarazzo, and Caleb McLaughlin are all locked into six-year contracts.

Although the Duffer Brothers are torn between how many seasons to release. "Four to five seasons is likely," Ross Duffer told E! News.

Six seasons of Stranger Things would be ideal, but fans of the show will definitely take whatever they can get of the thriller. 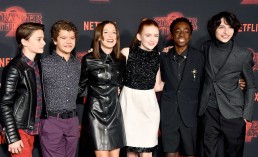