Stranger Things star Millie Bobby Brown won over a lot of fans with her portrayal of Eleven in Netflix's breakout hit, but not many of them would know that the 13-year-old actress is deaf in one ear.

Brown made the shocking revelation in her cover story with Variety magazine. In the interview, she told the publication that she was born with partial hearing loss and it became worse through her childhood. She completely lost her sense of hearing in one ear after a few years despite wearing tubes on one side. However, she doesn't let it stop her from doing what she enjoys.

When she sings, she can only hear half of herself, but doesn't let that get to her.

The English actress pointed out that while she's a trained actress, singing is something that "came to [her] naturally." She isn't too worried about acting or talking with her condition either. Brown told the publication that she uses her face to communicate because it's quite easy to express emotions like anger, sadness, and happiness.

The Stranger Things actress' next goal is to conquer the world of Broadway with her acting and singing prowess and has singled out Matilda as a musical she'd be interested in. Brown's co-stars Gaten Matarazzo and Caleb McLaughlin have been part of Broadway productions. While Matarazzo has worked in Les Miserables, Laughlin starred in The Lion King.

"They [Matarazzo and McLaughlin] told me their schedule, and I was like, whoa, that's crazy," she said. "But that's why I would like to. I think Broadway's such a tough kind of routine."

In September 2016, during an appearance on The Tonight Show Starring Jimmy Fallon, Brown showed off her singing talent with a rendition of Nicki Minaj's rap verse from Kanye West's "Monster."

The teenager reprises her role as the psychokinetic badass Eleven in the second season of Stranger Things, which arrived on Netflix last week. At the end of Season 1, we saw Brown's character sacrifice herself in order to destroy the headless creature (also known as the Demogorgon) from the upside down and save her friends Mike (Finn Wolfhard), Dustin (Matarazzo), and Lucas (McLaughlin).

There were never really any doubts that Brown would be returning for the second installment of the Netflix series. After all, Detective Hopper (David Harbour) did leave her favorite Eggos in the woods.

Brown, who won the MTV Movie & TV Awards for best actor in a TV show for her performance on the Netflix show, just wrapped up production on the upcoming Godzilla sequel. The film, titled Godzilla: King of the Monsters also stars Kyle Chandler, Vera Farmiga, and Thomas Middleditch. 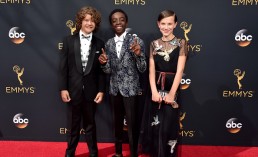 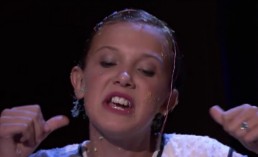 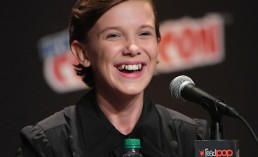 ‘Stranger Things’ Season 2 Spoilers: Eleven is not dead! The Telekinetic Girl will be back with stronger powers