All rise for Helena Bonham Carter! The actress is closing in on a deal to portray Princess Margaret in The Crown.

Bonham Carter And 'The Crown'

For the past few decades, actress Helena Bonham Carter has portrayed a plethora of characters in countless movies. From portraying Cinderella's fairy godmother in the Disney live-action remake of Cinderella to her tour-de-force portrayal of the nasty Bellatrix Lestrange in several Harry Potter films, millennials have been entertained by Bonham Carter's larger than life performances.

If Bonham Carter is cast as Princess Margaret, the Oscar-nominated actress is expected to take over the role from actress Vanessa Kirby. Kirby portrayed the younger incarnation of Princess Margaret during the show's first two seasons. The Crown's decision to replace Kirby was due to Netflix's show progress toward the present day.

Bonham Carter is very familiar with portraying members of the House of Windsor. The Princess Margaret candidate portrayed Queen Elizabeth II's mother, the Queen Mum, during the 2010 Oscar-winning film: The King's Speech. Bonham Carter was nominated for several awards including an Oscar, a Golden Globe, and a Screen Actor's Guild award for her portrayal of the beloved member of the royal family.

Should Bonham Carter accept the Netflix deal and join The Crown, the actress will definitely have her hands full. Bonham Carter will be joining Sandra Bullock, Cate Blanchett, and Sarah Paulson in the upcoming Ocean's Eleven reboot, Ocean's 8. The film, which will feature Bonham Carter's Rose collaborating with Bullock's Debbie Ocean and company, is expected to drop on June 8.

The Crown production team or Netflix have not denied Bonham Carter's involvement with the series. Actress Olivia Colman is the only participant that Netflix and the production team have confirmed for the series' third season. Colman is expected to portray the next incarnation of the United Kingdom's longest reigning female monarch. 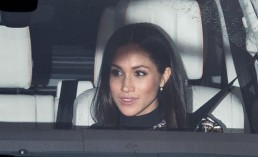