Kendrick Kicks Off The Show

As Lamar exited the stage, host James Corden introduced Lady Gaga, who performed her latest single: "Joanne" with producer Mark Ronson. Gaga revealed that the song was about her father's late sister. She delivered one of her most emotional performances on the Grammy stage as the "Born This Way" singer also sang "Million Reasons" with an orchestra. While Gaga left the stage, living legend Tony Bennett joined John Legend for an impromptu a cappella performance of "New York, New York" and handed Best Rap/Sung Performance Grammy Award to Lamar and Rihanna for "Loyalty."

After Corden acknowledged Jay-Z on receiving the 2018 Icon Award, he introduced the audience to Oscar and Grammy-winning singer-songwriter Sam Smith. Smith, dressed in all white, performed "Pray." The "Stay With Me" singer delivered an outstanding vocal performance that included a backing choir that took the Madison Square Garden audience to church.

Gary Clark, Jr. and The Late Show with Stephen Colbert music director Jon Batiste paid homage to the late Chuck Berry and Fats Domino with a medley of "Ain't That A Shame" and "Maybellene." The duo also announced that Ed Sheeran won Best Pop Solo Performance for "Shape of You" and accepted the award on his behalf.

Victor Cruz and Sarah Silverman introduced Luis Fonsi and Daddy Yankee, who performed their global smash "Despacito." The Latin music superstars — along with a group of dancers — turned Madison Square Garden to Puerto Rico. While Fonsi and Yankee delivered an excellent performance, it would have been better if their colleague, Justin Bieber, joined the stage with them.

While Corden joked about Fonsi and Daddy Yankee's megahit, he also introduced actor-singer Childish Gambino. The Solo: A Star Wars Story actor performed his hit: "Terrified." While there were only a few performers that joined Gambino on stage, the Community alum brought the Madison Square Garden audience into his world.

Chappelle gave the Best Rap Album to Kendrick Lamar's Damn, and the "HUMBLE" rapper gave a brilliant acceptance speech that acknowledged his heroes, Jay-Z, Nas and Diddy. Corden introduced P!nk, who performed "Wild Hearts Can't Be Broken." P!nk's beautiful vocal performance gave the audience a taste of her upcoming appearance at the Super Bowl, where she will sing "The Star-Spangled Banner."

After the Grammys acknowledged their Trustees and their Lifetime Achievement Award recipients, The Four: Battle For Stardom panelist DJ Khaled joined Rihanna and Bryson Tiller to perform their extensive collaboration: "Wild Thoughts."

Actors Donnie Wahlberg and Hailee Steinfeld announced that Chris Stapleton's From A Room: Vol. 1 earned Best Country Album. As the duo walked off the stage, Eric Church, Maren Morris, and Brothers Osbourne paid homage to the music fans who lost their lives at both the Manchester concert and Las Vegas country festival massacre with a bold cover of Eric Clapton's "Tears in Heaven."

Time's Up And 'Praying'

Before she introduced Kesha, Janelle Monae reminded the audience that they have the power to take down sexual harassment and inequality in the music industry. Kesha sang her comeback song: "Praying." The "Timber" singer-songwriter was joined by an all-star group of artists including Andra Day, Cyndi Lauper, Julia Michaels, and Camila Cabello.

As the group hugged on stage, Corden introduced Cabello, who briefly talked about the Dreamers before she told the audience U2's location. The Irish rock band performed "Get Out Of Your Own Way" on the Hudson River near the Statue of Liberty.

Song Of The Year, Plus Elton And Miley

Sting announced that Bruno Mars' "That's What I Like" won Song of The Year. Corden also auditioned performers such as Cardi B, Cher, DJ Khaled, Hillary Clinton, and Snoop Dogg for Fire and Fury's audiobook. He also tossed the microphone to Into the Woods costar Anna Kendrick.

Kendrick introduced Elton John who performed "Tiny Dancer." Cyrus, who wore a gorgeous magenta dress, joined Elton at the second verse. This performance comes days after Elton's announcement that he would retire from touring in 2021.

Corden introduced his parents to the crowd, who was annoyed that they would skip the show to see Hamilton. He introduced Grammy, and Tony-winning performer Ben Platt delivered an intriguing take on Leonard Bernstein's classic "Somewhere." Legendary Broadway icon Patti LuPone brought down Madison Square Garden by reprising her career-making performance of "Don't Cry For Me Argentina" from Evita.

SZA And Record Of The Year

The Talk co-host Eve and CBS actor Shemar Moore introduced SZA. The soul singer performed "Broken Clocks." The Voice coach Alicia Keys campaigned to have the Grammys come back to New York next year. While she presented Record of the Year. Keys announced that Bruno Mars' "24K Magic" won the illustrious award.

The Final Performances And Album Of The Year

As the 2018 Grammy Awards wrapped up, Chris Stapleton and Emmylou Harrs paid homage to the deceased musicians who passed away with Tom Petty's "Wildflowers." The final performance of the evening belonged to Logic, Alessia Cara, and Khalid who performed their hit: "1-800-273-8255." U2 awarded the last award of the evening, Album of the Year, to Bruno Mars's 24K Magic. 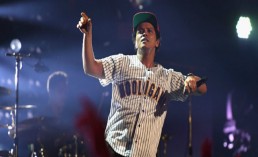 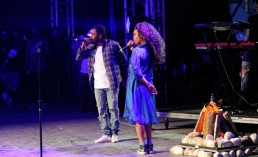 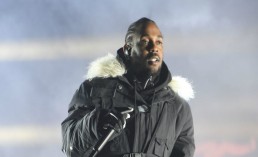