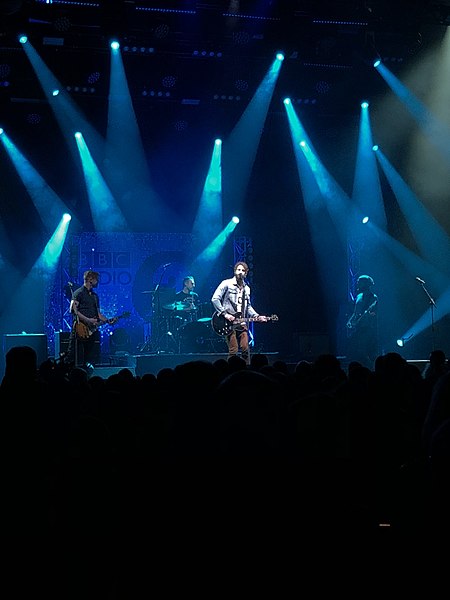 Ryan Hurd and wife Maren Morris will celebrated their second wedding anniversary in March 2020, and they couldn't be happier. The catch: they're expecting their first child in the same month they got married.

Morris took the good news to Instagram on Tuesday. She shared the maternity photoshoot she had with her husband, Ryan. Morris is expecting their first child, though Hurd clear looked even more excited for what's to come.

Morris, however, found the irony too obvious not to mention.

"After a year in the GIRL headspace, the universe gifted us with a baby boy to even things out," Morris said referring to the last album she made.

View this post on Instagram
The irony is just too rich that after a year of living in the “GIRL” headspace, the universe would give us a baby boy to even things out. See you in 2020, little one. A post shared by  Maren Morris (@marenmorris) on Oct 22, 2019 at 2:50pm PDT

In the first photo she posted, Ryan Hurd can be seen resting his forehead on Morris, both looking sincerely happy. They are seated next to each other while Morris is cradling her little baby bump comfortably.

Hurd also posted photos to celebrate the exciting new addition to their little family. Their followers on both Twitter and Instagram have expressed their happiness for the couple.

"MY BOYS CAN SWIM. BABY BOY HURD 2020!" Hurd wrote on Instagram as a caption to their photo looking lovingly at each other, with Morris exposing her growing baby bump. He also expressed his great love for his wife saying that he couldn't believe he is living this life with her. Now, all the fans are just drooling.

View this post on Instagram
The irony is just too rich that after a year of living in the “GIRL” headspace, the universe would give us a baby boy to even things out. See you in 2020, little one. A post shared by  Maren Morris (@marenmorris) on Oct 22, 2019 at 2:50pm PDT

On Twitter, Hurd shared Morris' post about her due date with a caption, "Look at her...can't believe it! See you in March, baby!"

The news about her pregnancy came months after Morris told People during an interview that before couples decide to get married, they should talk about starting a family and having kids.

"I am definite that I want a family because I know he (Hurd) would be such an amazing dad," Morris said. She believes that her husband would be such a great dad. He describes him as a kid himself. She further added that they both love each other's families and that says a lot.

The young couple, who is expecting their first child on their second anniversary, met back in 2013. They were collaborating on a song for Tim McGraw of Nashville back then.

They kept the friendship for a couple of years until they came out about their budding romance in 2016. In July of 2017, Hurd proposed and finally exchanged vows on March 2018.

During the stunning ceremony, Morris was wearing a custom-made dress by designer Cavanagh Baker, a designer based in Nashville. Cavanagh drew inspiration for the high-low silhouette from the vintage wedding dress of Morris' mother.

Morris, a Grammy award-winning singer-songwriter, riled up her fans on social media when she talked about planning a family. When a fan asked her if she was planning to have kids, she jokingly posted a selfie with Hurd and captioned, "gonna have your babies."