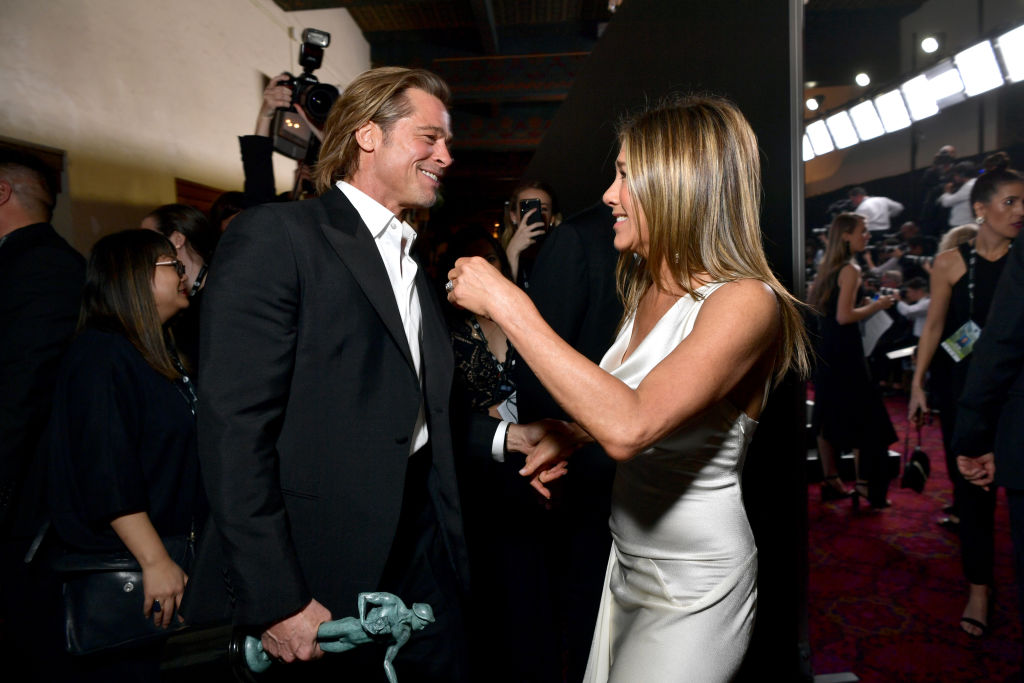 Brad Pitt had a string of high-profile relationships before marrying Jennifer Anniston in 2000.

The "Ad Astra" actor met the Emmy Award winner in 1994 after being introduced by their managers.

In an interview with Rolling Stone, the "Friends" alum described Pitt, who was dating another Hollywood actress at the time, as a "sweet normal guy from Missouri."

Four years later, the newly single Pitt found himself on a blind date with Anniston, which was arranged by their managers.

In 1999, news broke that the duo got engaged, and soon after, Hollywood's golden couple tied the knot in July 2000 at an extravagant ceremony in Malibu, California.

Back then, Pitt was rumored to be dating his now-ex-wife Angelina Jolie after the duo met on the set of their 2005 action comedy film "Mr. and Mrs. Smith."

Now, it appears that the "Once Upon A Time in Hollywood" star is back in the dating scene after Pitt is reportedly seeing the 27-year-old German model Nicole Poturalski.

The pair was spotted boarding a private jet in Paris as they headed to the South of France.

Prior to his highly publicized marriage and relationship fallouts, the "Troy" actor had a star-studded dating history, and with that said, here's a list of Brad Pitt's girlfriend before Jennifer Anniston and Angelina Jolie.

Perhaps, one of his famous relationships was with the "Shallow Hall" star in 1994.

Gwyneth Paltrow and the "12 Years a Slave" actor were both chosen as cast members in the neo-noir psychological crime thriller film "Seven."

During the previous Golden Globes awards that year, Pitt described the blonde beauty as "the love of his life."

After two years of dating, Pitt decided to pop the question; however, after being dialed by paparazzi, the couple called it quits.

According to Us Weekly, Paltrow had a hard time moving on from her relationship with the actor. In fact, she almost turned down the movie "Shakespeare in Love" that earned her Academy and Golden Globe award.

The award-winning actress Geena Davis also made it to the list of Brad Pitt's girlfriends.

The two met on the set of 1991 film "Thelma & Louise," which is the film that paved the way for Pitt to put his name on the Hollywood map.

According to reports, Pitt and Davis unofficially dated for a year after filming their iconic movie.

In addition, the actor's former roommate, Jason Priestley, revealed to The Hollywood Reporter that the pair's legendary love scene in "Thelma & Louise" was inspired by a real-life romance between the two.

One of Pitt's celebrity flings was the "Dead to Me" star, Christina Applegate.

The couple briefly dated in 1989 until she reportedly ditched him at the night of the MTV Video Music Awards in the same year for another guy.

In 2015, Applegate appeared in "Watch What Happens Live" and confessed to host Andy Cohen that the rumors were true.

READ MORE:Emmys 2020: The Good, the Bad and the Ugly of the Awards Show