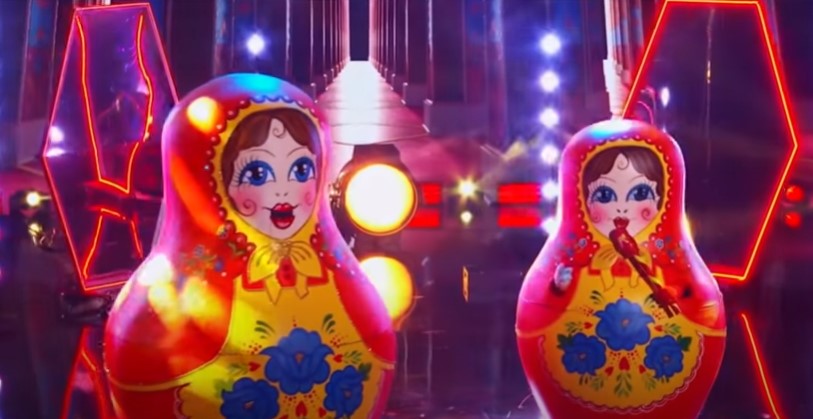 The Masked Singer revealed on Wednesday that Russian Doll has been concealing yet another performer beneath its many layers, suggesting a third costumed singer to join what had previously appeared to be a two-person act.

Is there room for one more? Is it true that we're looking for a singing trio?

Ken Jeong seems to have it all figured out in the video clip sent to E! online. When he makes the guess that the dolls are three members of The Jackson 5, one of the dolls turns around. Is the doll offended by that guess, or, as guest panelist Joel McHale says, is the doll on his side?

According to the publication, the addition of a third doll only serves to emphasize that these dolls are all members of Hanson, a boy band comprised of three siblings--Zac, Taylor, and Isaac -- who have been performing since they were children.

"They sound like Hanson, and the clues fit. They were once a shiny toy, and resisted being put "in a box" with other, more manufactured toys, so they've been doing their own thing ever since," it said.

READ ALSO: 'Jeopardy' Ratings with Katie Couric Continue to Drop But Not Really Bad at All: Can Dr. Oz Push it Up?

Goldderby agrees with E!Online saying that "We aren't buying the judges guesses that the Russian Dolls are Boyz II Men or Lady A."

The publication explained that the initials of the siblings can be seen in the stylized spelling of the sign "Mizfitz Toy Store," which also has a link to the trio. In 1994, Hanson made one of their first TV appearances on Carman's "Yo Kidz."

The group's star shone brightly for several years before fading when they switched record labels in 2000. They were quickly dropped by their new label, which, according to Goldderby explains the Russian Dolls' reference to "being put on a shelf."

Moreover, it said that the shots of snow reminded them of Hanson's first Christmas album, "Snowed In."

Lastly, the publication pointed out that Taylor, in addition to playing with his siblings, is the lead singer of the band Tinted Windows, which explains why one of the Russian Dolls claims to do his own way.

Watch the video clip below: