'And Just LIke That' MAJOR SPOILER: THIS Cast Will Star in One Episode Only But Gets $5 Million [RUMOR]

A major spoiler, but it is still a rumor at this point, for the highly-anticipated "And Just Like That" show has been revealed on the popular Instagram gossip and celebrity account, Deuxmoi.

According to an industry source with knowledge of the "Sex and the City" reboot, one major character will die on the first episode.

They shared to Deuxmoi, "Have it on good authority ___ dies in episode 1 of a heart attack."

The anonymous tipster, who "don't care about NDAs at this point," said that Mr. Big, played by Chris Noth, will die on the first episode of the "Sex and the City" reboot.

The character will reportedly suffer a heart attack.

Not only is Mr. Big going to die, but his appearance on "And Just Like That" has earned him $5 million.

However, it's still best to take this gossip with a grain of salt. Fans will only know what happens when the show finally airs, as the tipster said Mr. Big is going to die on the first episode. 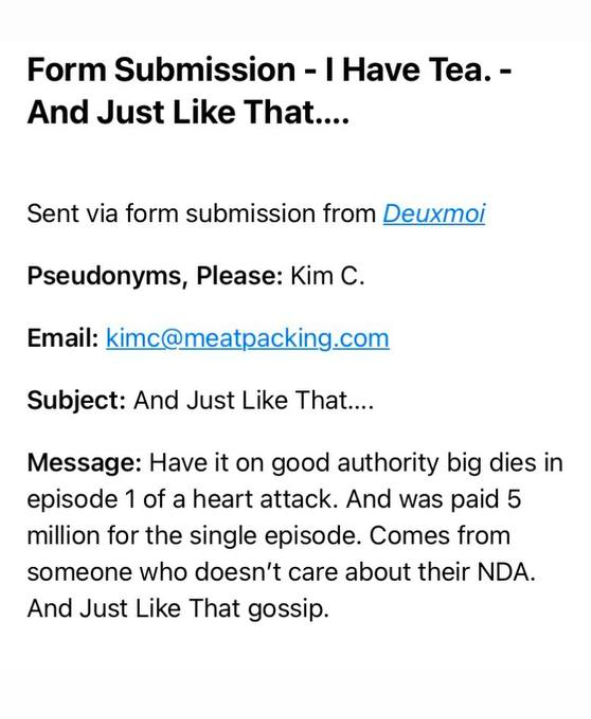 READ ALSO: Eminem's Ex Kim Scott Second Suicide Attempt Update: She Tried To Kill Herself Because of This?

Sarah Jessica Parker and Chris Noth are reprising their most-loved characters on "And Just Like That," as Carrie Bradshaw and Mr. Big, respectively.

A few days ago, they took to their social media accounts to share a glimpse of how their characters are doing after getting married during their 2008 movie, "Sex and the City: The Movie."

The 56-year-old Hollywood actress posted a photo from the set showing her and Noth happily staring into each other's eyes.

Mr. Big holds his wife's face with his wedding ring on display, as Carrie also pulls him close in a cute hug.

SJP captioned the post, "These 2. I bet they stay out late tonight."

Meanwhile, the 66-year-old actor commented on a series of whisky glass emojis in the comment section.

Noth also posted a photo of him and his on-screen lover getting cozy on the set of the "Sex and the City" revival, with the caption, "Together again!"

Chris Noth on 'Sex and the City' Revival

Chris Noth, who has been a significant character on the show since its early years, reportedly hesitated to step back into the role of Mr. Big for the HBO reboot.

Speaking to Yahoo, Noth confessed, "I didn't really feel I had anything to offer in that role again."

"It kind of felt like I had done it, but [executive producer] Michael Patrick King is just an incredible writer and has incredible, creative ideas, and once we got together and talked about the potential of what we could do with the character, I was all in."

There is still no release date for "And Just Like That," but production is underway for the 10-episode reboot.

The 'Sex and the City' Reboot 'And Just Like That' Official Trailer Is Finally Here! Sarah Jessica Parker Looks Extravagant!

The official trailer for the highly anticipated Sex and the City reboot And Just Like That has FINALLY been released!

Despite being one of the most famous fashionistas in Hollywood, Sarah Jessica Parker reportedly struggled with financial problems last year which forced her to give up her lavish lifestyle; could this be true?

IT'S HERE! The Official Teaser Trailer for the 'Sex and the City' Reboot 'And Just Like That' Starring Sarah Jessica Parker is FINALLY Here!

And just like that, the official teaser trailer has been released!

Sex and the Sexism? Star of 'Sex and the City' Reboot 'And Just Like That' Sarah Jessica Parker Calls for an End to the Misogynistic, Ageist Criticism! GO CARRIE!!

There has been a lot of misogyny in the air directed pointedly at the upcoming Sex and the City reboot And Just Like That..., and star Sarah Jessica Parker has had enough of it. Rather than beating around the bush or pretending the problem doesn't exist, SJP has spoken plainly about this issue.

AND JUST LIKE THAT! Nicole Ari Parker Talks about How The Sex and the City Reboot Staring Sarah Jessica Parker Will Tackle Race Issues

And Just Like That... the highly anticipated sex and the city reboot is right around the corner.

New pictures from the upcoming show And Just Like That... show the ever iconic Sarah Jessica Parker getting close, like very close,with Jon Tenney.

You're Not a Carrie: Bushnell Tells Fans Sex and the City is not a Lifestyle Choice

Turns out Sex and the City should not be the keystone upon which you make all of your life decisions.

Willie Garson Dead At 57: 'Sex And The City' Actor Cause Of Death In The Middle of Revival Filming -- Revealed!

Best known as Stanford Blatch from HBO's 1998 show "Sex And The City," Willie Garson passed away.

As "Sex and the City" reboot continues filming in New York City, is it true that Kim Cattrall is leaving the big apple to avoid the show's production and Sarah Jessica Parker?