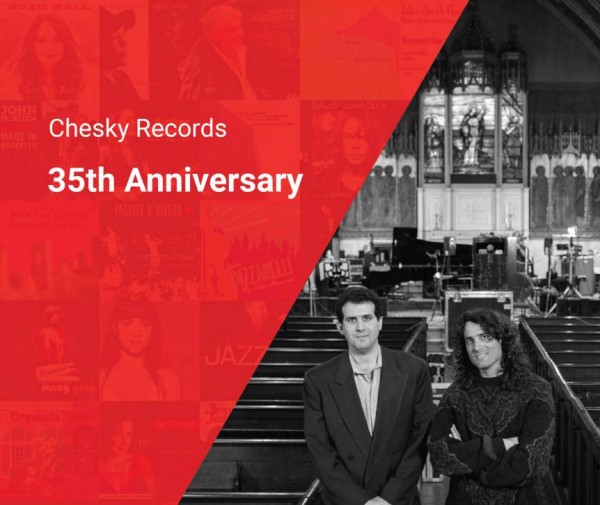 ALSO READ: Micko Roche Takes You to an Otherworldly Experience With 'Sióg'

Aside from tracks in the album, The Chesky Records 35th Anniversary Collection also features a booklet that retells the colorful history of the record label, including photos and even accounts from the label co-founder David Chesky and engineer Bob Katz. Steve Guttenberg also contributes to the exclusive add-on with interviews from the record label's engineers Barry Wolifson, Nicholas Prout, and Bob Katz.

"Right from the start Chesky Records had a sound. David Chesky set out to make 'aural photographs' of each session, capturing as much of the sound of being there as the technology allowed, continually pushing it forward," an article on the album's page at Chesky.com began. The article continued by noting how every session in the recording label was captured "live": no overdubs or no fixing in the mix. Chesky also mostly recorded in acoustically conducive locations like actual concert halls and churches, citing the former RCA/BMG studios located in Manhattan.

Fans of the record label can expect the same top-notch quality, with each track recorded in the highest resolution when purchased from HDtracks or the official website at Chesky.com - all for $35! Due to the quality of each track, and the following file size, the album is available in two parts at the Chesky.com website. The entire The Chesky Records 35th Anniversary Collection is also available for standard resolution music streaming on Spotify and Apple Music, and can also be purchased from iTunes.

Chesky Records was originally founded by studio musician and composer David Chesky together with his brother Norman, starting the project in 1978. The record label was established in an attempt to preserve the texture and sound of the "live studio" performance, without post-production fixes or overdubs.

It made the record label famous for its binaural recordings or sounds intended to be heard using both ears. In 1990, the label began recording sessions in churches, with one of the earliest attempts to push the boundaries of clear and live performance being the re-issue of American classical pianist Earl Wild's reinterpretations of Rachmaninoff for Reader's Digest.

Some of its most recent talents includes Macy Gray, who made the critically acclaimed debut jazz album Stripped, which peaked at the third spot of the Billboard Jazz Charts, as well as artists Meiko and Casey Abrams.

Tags: new album Jazz Music
© 2021 EnStars.com All rights reserved. Do not reproduce without permission.
Most Popular
You May Also Like