You hear that? That little voice in your head that orates the everyday goings on of your daily life. Be it as mundane silently lambasting yourself for spilling coffee on your shirt or as life affirming as monologuing about what led to finding your true love, the mind's eye is a constant raconteur of the experiences that make us who we are. This voice works as a symbolic angel or devil on our collective shoulders, critiquing the world to an audience of one. Seen as one of the more interesting storytelling techniques, creatives have used this inner narrator to bring an audience up to speed and further the plot-line, and if used properly, creating a sort of secondary character to the one shown in the world the story inhabits. 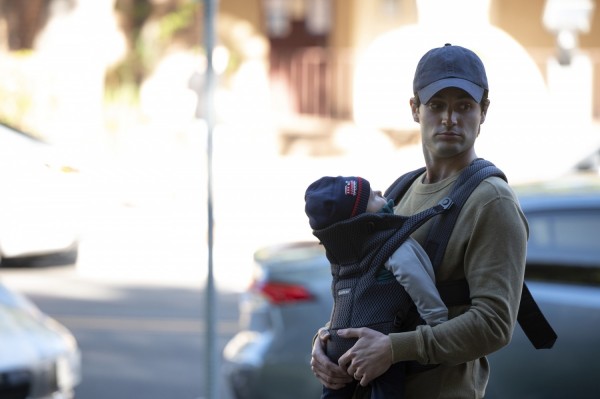 Shows like the Netflix hit You, use this device to deepen the character of Joe, a stalker who obsessively works his way into others lives while explaining his reasoning to the audience. This first-person narration, albeit creepy, works well to ease the viewer into the mindset of a man that, if given no context for his actions, would play as completely terrifying. By getting to know the mind of Joe, it lessens the blow of his socially unacceptable actions by letting you know who you're on the ride with.

Here are a few more examples of how the first-person narrator is used to shape the shows we love, while building a stronger character in the process.

The Wonder Years was a recap of the life of Kevin Arnold (played by Fred Savage), a teenager growing up during the confusing years of the Vietnam War. Told from the perspective of his older, wiser, self, actor Daniel Stern plays Monday morning quarterback with the younger Kevin. Throughout the series, he talks about his experiences growing up, meeting girls, and dealing with family, while pointing out the life lessons that brought him to where he is in his adult life. Recently rebooted, Don Cheadle takes the role of narrator to bring to light the experiences of a Black youth in 1960's Alabama. Though the issues facing the boys may be different, the method of storytelling works brilliantly in both cases.

Saved By The Bell

In one of the more interesting ways of using a narrator, the mischievous Zack Morris of Saved By The Bell would often pull a "Time Out," pausing the action of the world around him in order to address the audience directly to bring the viewer up to speed. This sort of fourth wall breaking gave Zack a moment to reflect on the decisions he has made and allowing for a closer look into his rationale. Given that the audience were teenagers themselves, this plot device helped kids to learn from Zack's mistakes when all was said and done.

How I Met your Mother

How I Met Your Mother is another example of the future self regaling their life to the audience, in this case, their children who want to know the answer to the titular question. In the show, Ted (played in the future by a point of view Bob Saget) talks about the different wacky situations that led him meeting his wife. Every episode unpacks another layer of his early years as a single guy trying to meet the right woman. Used to great effect, this version of the narrator interacts with his kids to the benefit of the viewer and is one of the more entertaining methods of this storytelling device.

Sex And The City

Based on a book of the same name, Sex And The City's narrator was played by the main character, writer Carrie Bradshaw, who documented her experiences with love and friendship in the big city. Throughout the series, Carrie, in an almost journal entry style, would talk to the audience about the goings on of her life as she wrote a weekly magazine column called, you guessed it, Sex And The City. What is seen in every episode is the first hand account that fans of her column are being told. A nifty little trick to bring her story to life in the most meta of ways, it is no wonder why the show was a huge success.

Funny man Chris Rock has never been shy about what makes him tick. So, it was no wonder that he produced and narrated a show about how he became the comedian he is today. Speaking his truth, Rock takes some of the more influential, and hilarious, moments of his childhood and dissects them from a more enlightened point of view. Acting as almost a series version of his stand-up, Everybody Hates Chris plays similarly to The Wonder Years dynamic, with the unmistakable wit of the man who lived it.

Thomas C. Hall chilled viewers for years with his conflicted serial killer character Dexter, a police blood splatter analyst who uses his secret urge to murder against evil people who he deems to deserve to die. In every episode, Dexter breathily narrates his need to find balance with his 'Dark Passenger', as he calls it, and the want to live a normal, boring life. Much like the show You, Dexter perfected the use of inner monologue as a way to sway favor towards someone who is obviously doing something evil. His way of justifying the darkness that resides in his character plays havoc with the viewers' perception of who he is and why he does what we all know is wrong, all the while urging us to take the ride week after week.

My Name Is Earl

This wacky comedy told the story of Earl Hickey, a neerdowell petty thief, who after finding out about the concept of Karma, decides to make up for all of the bad things he has done in his life. 'Do good things and good things happen', plays as a mantra for the show as Earl narrates his day throughout each episode. The way it is used, helps to further the plot without wasting time having to show big moments through lengthy scenes, instead wrapping them up in short vignettes that get the point across simply and to greater comedic effect.

Recounting the lives of the residents of Wisteria Lane, Desperate Housewives tells its story through the disembodied voice of Mary Alice, a friend of the shows four leads who has recently committed suicide. A well used version of storytelling, this method of Mary Alice as the omniscient narrator gives her the chance to be a reliable source of information, while tying herself to the overall narrative, and in this case, spark the inciting incident of the series.

Tags: Narrators Lists televison you
© 2021 EnStars.com All rights reserved. Do not reproduce without permission.
Most Popular