The hit HBO show, Euphoria, starring Zendaya, has set it's official Season 2 premiere date for January 9th, 2022. The teen drama has been a smash hit for the streaming service. The award winning actress plays Rue Bennet, a recently released from rehab drug addict trying to make her way in the world. This journey of self discovery, love, life, and identity has captivated the hearts and interest of many around the world. So, yesterday, when Zendaya took to her Instagram to post the teaser trailer for the upcoming season, people were reasonably excited.

The trailer shows Zendaya as Rue dancing and singing along to Frank Sinatra's Call Me Irresponsible. It is the dancing-in-your-room-alone teen moment we have seen time and time again. This time, Rue's voiceover eerily enters saying, "When you're younger, everything feels so permanent. But as you get older, you begin to realize nothing is and everyone you love can drift away." We can't wait to see what the rest of this phenomenal story has in store. 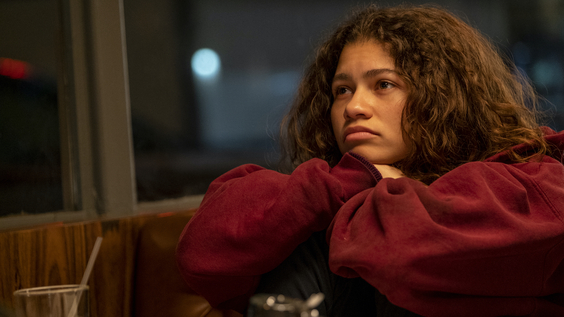 
The young actress has become a true staple of Hollywood in the past few years. She recently appeared in Dune, the box office hit. Having been a working actress since she was a child, the star makes sure she takes time to take care of herself and her mental health. In October she told Vogue:

Yeah, of course I go to therapy...I mean, if anybody is able to possess the financial means to go to therapy, I would recommend they do that. I think it's a beautiful thing. You know, there's nothing wrong with working on yourself and dealing with those things with someone who can help you, someone who can talk to you, who's not your mom or whatever. Who has no bias.

The importance of mental health, of finding yourself, are explored in the amazing show. We can't wait to tune in to season 2 of Euphoria on January 9th.

Tags: euphoria Zendaya hbo tv shows HBOMax
© 2021 EnStars.com All rights reserved. Do not reproduce without permission.
Most Popular
You May Also Like

Sydney Sweeney of the hit series 'Euphoria' recently took to Instagram live to vent out her feelings against online bullies.

Billie Eilish made a surprising revelation about her collaboration with Rosalia for their track "Lo Vas A Olvidar."

The long wait is over for Billie Eilish's highly anticipated collaboration with Rosalia.

FINALLY Jacob Elordi congratulates Zendaya on her Emmy win for Outstanding Lead Actress in a Drama.

Zendaya hit two birds with one stone during the 72nd Primetime Emmy Awards.

New couple alert! Zendaya and Jacob Elordi literally set the Twitter world in a "euphoric" state after photos of their PDA moments in New York City spread like wildfire.

Zendaya and her "Euphoria" co-star Jacob Elordi have spoken in the past how close they are, stressing that they are just friends amid their recent dating rumors.