Straw Hut Media, the podcast network that brings you Brandi Glanville Unfiltered, Genuinely GG, and PRIDE, announces a new podcast hosted by Emile Ennis Jr. and AJ Gibson. Confess Your Mess is the go-to podcast for the juiciest listener-submitted and celebrity secrets, expertly spilled each week by Emile and AJ, with special celebrity guest appearances from their impressive circle of friends. 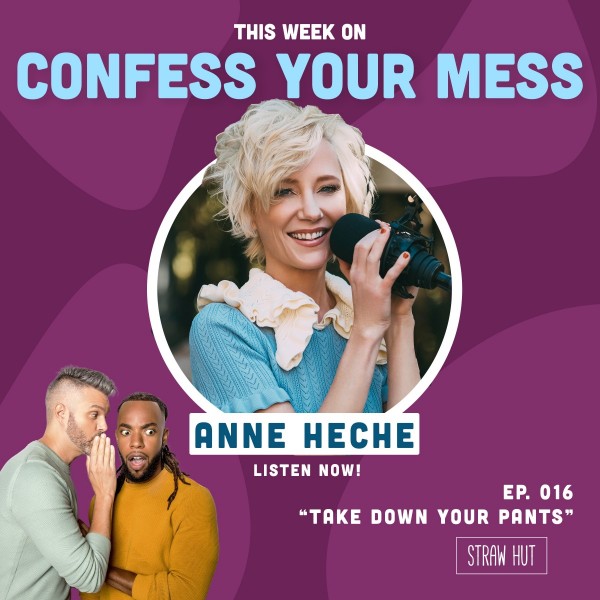 The duo released their 16th episode today, Thursday, December 2nd with Emmy-winning actress Anne Heche. In this episode, Anne reveals that she hasn't "been with another woman since Ellen [DeGeneres]," yet people still label her as bisexual. On the topic of cancel culture, Anne says "I believe I was the original cancel," referring to the hit her career took after publicly coming out as Ellen DeGeneres' girlfriend. Anne also shares that on a recent first date, her date revealed he was married, and she left when he tried to kiss her. She also reveals that she was recently cast opposite The Weeknd in an upcoming HBO project. While she "can't share too much," she does say "I'm not playing his lover."

Previously the lead host/producer for Clevver News, Emile's entertainment stories and celebrity interviews have been viewed more than 100 million times globally, making him one of the most successful entertainment journalists in the digital space. He is a regularly featured contributor on FOX's Emmy-Winning talk show The Real, Amazon Live and recently co-hosted the official HFPA Presents: Golden Globes Countdown Live with his fiancé AJ. He received national press for his in-depth interview with Issa Rae and has been featured in Cosmopolitan, The Hollywood Reporter & more!

Newly engaged to Emile is TV/radio personality, author, and motivational speaker, AJ. AJ can be heard five days a week as the current host of the nation's first LGBTQ+ radio talk show The Morning Beat. He was also host of the nationally syndicated daytime talk show Hollywood Today Live on FOX and appeared as a guest co-host on Access Hollywood Live and The Wendy Williams Show, where he has been a regular entertainment correspondent since 2016.

"We've worked really hard, in partnership with our team at Straw Hut Media to create a super fun, sometimes inappropriate escape every Thursday," shared AJ. "Some of our best friends and your favorite celebrities will be stopping by to give honest reactions to your secrets and revealing their own exclusively here."

Emile shared his excitement by adding, "Listeners will gasp, giggle, and sometimes even gag, as for me, AJ and a celebrity guest reveal and react to listener-submitted secrets, along with some scandalous skeletons from celebrities far more popular than us - so join the party!"

RELATED ARTICLE: Ellen Pompeo Reveals Her Dream Podcast Guest: 'Isn't That Who We All Want to Sit Down With?'

Tags: Celebrities actress podcast Anne Heche
© 2022 EnStars.com All rights reserved. Do not reproduce without permission.
Most Popular
You May Also Like

Welcome back to another episode of Podsauce! Fresh off the plane from the Audacy Beach Festival in Fort Lauderdale, Florida, Dax and Alesha had a great time interviewing celebrities about podcasts they love, podcasts they've been on, and podcasts they host.

Soon-to-be newlyweds make a mess as they spill the tea on celebrity gossip.

Power 105.1 Announces Lil Baby and Roddy Ricch to the Star-Studded Lineup for Powerhouse at Prudential Center

Podsauce’s hosts Alesha and Dax are talking with Lisa about her transformation, reclamation of her happiness, and creation of “Losers With A Dream” on this web exclusive.

Jauregui says that the 'girl' who is 'growing and healing' from her time in Fifth Harmony now lives and breathes in her new music.