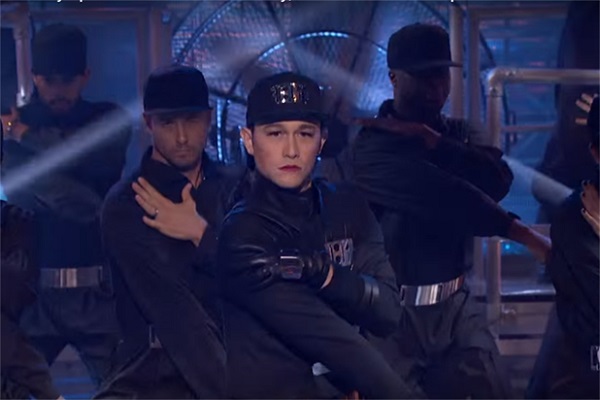 Joseph Gordon-Levitt gave an early Christmas gift to fans by giving his best performance yet, lip syncing Janet Jackson's hit song "Rhythm Nation." The actor was featured on the show with actors Seth Rogen and Anthony Mackie, who competed and tried to win the show.

Mackie's performance of MC Hammer's "2 Legit 2 Quit" was just as phenomenal. Mackie wore a white suit and graced the stage with his MC Hammer-inspired dance moves, all while stripping down to a black spandex. The actor really heated the dance floor but JGL stole the show and the audience with his amazing dance moves and perfectly-synchronized choreography. Gordon-Levitt had full make up on, wore a bright red lipstick, black wig and and an all-out costume for his complete rendition of Janet Jackson's song.

The show was full of Santa costumes with Seth Rogen wearing one. Mackie and Gordon-Levitt really battled it all out. Aside from an MC Hammer original, Mackie also lip synced "I Kissed a Girl" by Katy Perry as his opening performance, which was eventually answered by Rogen, quote, “I think he got that little chunk of the stage pregnant. That was a sexually charged performance.”

The two competitors had a close fight but JGL killed "Rhythm Nation" which makes him still the "King" of lip-syncing and will forever hold the title, "Joseph Jackson."