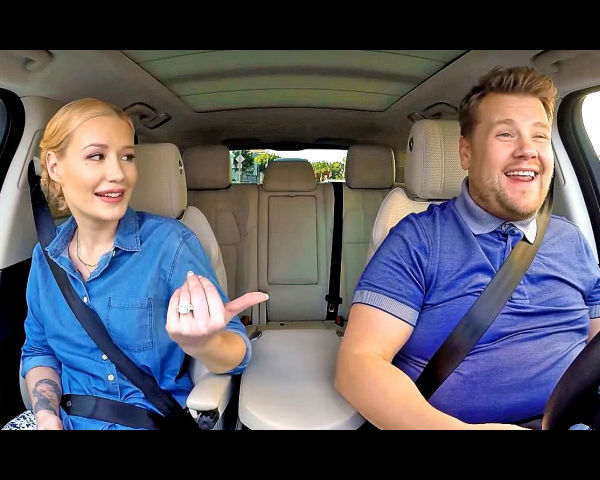 James and Iggy Azalea carpool through Los Angeles singing some of her classic songs and stop in to a bridal shop to try on wedding dresses ahead of Iggy's nuptials.

The newly engaged “Fancy” singer joined James Corden for the popular Late Late Show segment to sing along to her most popular tunes. Cruising around Los Angeles and belting out some of Iggy’s hits, the British presenter also quizzed the 25-year-old singer about her upcoming wedding to Lakers player Nick Young.

Iggy revealed the special occasion will take place next year, and confirmed she will be having four bridesmaids - and one of them will be Demi Lovato. Also, she said that she won't be a bridezilla.

She has been in a relationship with Los Angeles Lakers basketball player Nick Young since November 2013. Azalea and Young were featured in the March 2014 issue of GQ magazine. They reside together in Tarzana, California. On 1 June 2015, they announced their engagement.