Potente will take on the role of Commander Shaddick, Chief Inspector of the Galactic Authority's Serious Crimes Division. A recurring character, Shaddick will encounter One (Marc Bendavid) through Six (Roger Cross) once they land behind bars at Hyperion-8.

Described as "cool, calculated and determined," Deadline reports that Shaddick will be hell-bent on proving the Raza's amnesiac crew was involved in the destruction of Iriden 3. Look for the Inspector to have a sit down with the incarcerated heroes in episode 2.

If you're scratching you're head wondering where you've heard of Iriden 3 before, you can stop. The name was never mentioned during season 1, but, if we had to guess, we'd wager Iriden 3 was home to the Mikkei Combine Research Facility that the White Hole device obliterated back in episode 11. Giving an entire planet the Alderaan treatment (and terminating 15 thousand lives in the process) is an act of terror worthy of the title "serious crime."

As per the Android (Zoie Palmer), a White Hole is "an area of space-time which can not be entered from the outside, but which is capable of emitting vast quantities of matter and energy." While the Raza team delivered the triggering device to the planet, they certainly didn't orchestrate the attack.

Once Two (Melissa O'Neil) navigated the ship out of the blast zone, the explosion took backseat to her escapades at Dwarf Star Technologies. According to series creator Joseph Mallozzi, however, the "repercussions from that little incident will run through much of season 2."

Do you think Shaddick is investigating the White Hole incident or is there another storyline in the mix? Find out when Dark Matter returns to Syfy on June 1. Click the video below to see a preview for season 2. 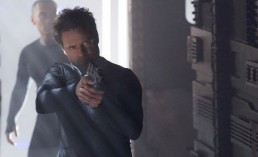