"The Flash" has continued to make impactful episodes as of late, with the "Flashpoint" angle bringing in the gold. Now, a recurring villain will once again cause trouble to Barry Allen and the rest of his colleagues.

Barry Allen's "The Flash" may have another name to worry about once again that will come to Central City, namely the psychic Gorilla Grodd. It was reported that Gorilla Grodd is to once again be a force to be reckoned with, and this time, with the odds presumably in his favor.

According to Entertainment Weekly, after Grodd was disposed of in the past events of "The Flash," Barry and the team will go to Gorilla City, showing where the Simian villain was taken to. The story will cover two episodes, and Executive Producer Aaron Helbing disclosed that it will be something to be excited over. There will be sequences in them that will be "unbelievable" in scale and scope, to the point that he has not seen anything like such on television.

No specifics yet have surfaced on what else Grodd will be doing in "The Flash." Nonetheless, the monstrous antagonist is expected to spill wrath with his mental powers, giving Barry and his friends more challenges to deal with.

Gorilla Grodd is one DC character that has been consistently exposed to various forms of media, dealing not just with the Scarlet Speedster, but also with other DC superheroes. Grodd first appeared in "The Flash" comics #106 in 1959, and has since then been given multiple renditions-from games, to animated flicks and finally, the live-action version in "The Flash."

Grant Gustin plays the titular role, with the human alter ego of Barry Allen. He is joined by Danielle Panabaker as Caitlin Snow, Carlos Valdes as Cisco Ramon and Tom Cavanagh as Harrison Wells among other lead characters. The series started running in 2014 and is still one of the most critically appraised award-winning sci-fi series to date. 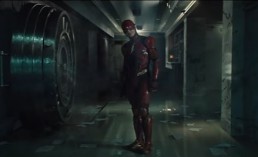