A week after rocking the stage at the Super Bowl halftime show, Lady Gaga is getting ready to pull off another ambitious performance at the Grammys.

Lady Gaga is set to perform with Metallica at the #GRAMMYs this Sunday, February 12th! pic.twitter.com/SqPDLqclBV

Metallica is nominated for Best Rock Song for their single "Hardwired", which may seem odd considering there is a Heavy Metal category in which they could have been nominated.

"To me, it's a really good sign for metal - that they are having a wider appeal out of just the strictly metal community into the larger rock community," Bill Freimuth, senior vice president of awards at the Recording Academy, told UltimateClassicRock in January. "My take on that is they should be really happy that they are getting that broader recognition."

Meanwhile, this will be Gaga's third consecutive Grammy performance, having performed "Cheek to Cheek" with Tony Bennett in 2015 and performing an epic David Bowie tribute in 2016. She previously performed in 2010 with Elton John, and in 2011 to promote "Born This Way", in which she memorably appeared in an egg vessel.

Gaga is coming off rave reviews for her Super Bowl halftime show. The pop star began the set on the roof of NRG Stadium, singing "God Bless America" and "This Land Is Your Land" before catapulting into the stadium and performing a medley of hits, including "Poker Face", "Born This Way", "Telephone", "Just Dance", "Million Reasons" and "Bad Romance". 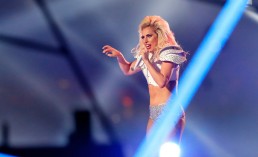