Jamie Foxx and Olivia Munn ran into one another during the Mayweather vs. McGregor fight in Las Vegas on Saturday night, August 26, and posed for a number of red carpet photos together.

Just days after Foxx and his rumored girlfriend, Katie Holmes, stepped out together in Los Angeles with her 11-year-old daughter, Suri Cruise, Foxx and Munn reportedly looked quite cozy as they smiled and posed for photos. In fact, the pair appeared so comfortable with one another that they actually sparked rumors of a romance.

"Jamie, 49, placed his arm around Olivia's waist and held her close as they took photos before the sporting event. They were also extremely playful with each other — Olivia even pretended to give Jamie an uppercut to the chin in anticipation of the boxing match," Life & Style magazine revealed to readers on August 27.

That said, a source told Entertainment Tonight a short time later that there was "nothing" to their red carpet interaction and noted that the two actors only posed together after photographers requested they do so.

During the event, Foxx and Munn both spoke to the outlet about the fight and revealed that they were rooting for different people.

"That's my man, Money May," Foxx told the outlet. "I've been with Floyd for almost 20 years now, and I think it's great what he's done for the sport. You know, boxing has been sort of hanging by a thread. He single-handedly keeps boxing alive, keeps people excited."

Meanwhile, Munn was in attendance to see McGregor and spoke of her own fighting skills.

"Well, you know, I grew up doing Taekwondo ... all the kids in my family, we all have black belts," she said. "Martial arts is definitely my thing."

To hear more from Jamie Foxx and Olivia Munn, check out the clip below.

Katie Holmes Dating: She Steps Out With Jamie Foxx; Source Says They're 'In Love' [VIDEO] 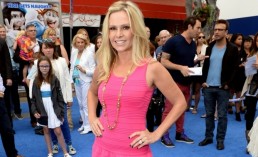