Katie Holmes and Jamie Foxx finally went public with their romance days ago and regardless of Tom Cruise's potential thoughts on their relationship, the actress has remained unconcerned.

While many have labeled Foxx's romance with Holmes as a betrayal due to his past friendship with Cruise, Holmes is living her own life and not worrying about what her former husband thinks.

“Katie is desperate to live her own life, and she is no longer worried about Tom’s feelings anymore,” a source close to Holmes revealed to Hollywood Life on September 8.

“It has taken Katie years away from Tom to become no longer afraid of upsetting the powerful ex. Katie feels she has been more than respectful of Tom’s privacy and the time has come for her to move on with her life," the source continued. "She has been secretly in love with Jamie for some time and is happy to take her affair out of hiding. Katie has finally decided to live her life for herself and not worry about Tom’s emotions. It has been over 5 years since their split and Katie can’t help it if Tom is still hung-up on her actions or love life. She is happy to finally be living outside of Tom’s shadow and does not care what he thinks or how he feels about her life anymore.”

Holmes and Foxx were first linked to one another in 2013, about one year after Holmes' divorce from Cruise was finalized.

“Jamie still wants them to pump the brakes on going too public but it’s got zero to do with Tom, it is more about protecting their privacy and safeguarding their love. Jamie believes they will be cursed if they go too public. Katie is ready to be more public but Jamie is holding them back, he thinks maintaining their privacy keeps things more intimate.” 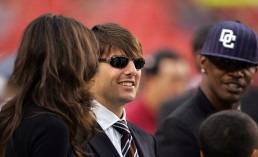