Actress Katie Holmes has been raising her daughter Suri single-handedly after her separation with ex-husband Tom Cruise. Holmes has been enjoying being a single mom but she has said that she is tired of Cruise not being around for the kid and ignoring his duties as a dad. A source close to Holmes said that she has grown extremely frustrated of Cruise's absence as a dad, reported Hollywood Life.

The 55-year-old actor has not been present for Suri ever since the couple broke up in 2012. Suri is now 11 and mom Holmes has always made sure that her daughter is her topmost priority. The source added that Holmes has adjusted with Cruise's lifestyle, work, and his spiritual front and has decided to do her best as a parent on her own.

Suri is now used to not having her dad around and she is getting to know about her superstar dad from the world outside and it makes growing up for her quite hard. However, the mother and daughter have grown closer with the actor's absence and their bond has become tighter than ever.

Although Suri might miss her dad a lot but she shares a close bond with her granddad, Holmes' father and also with her mom's new boyfriend, 40-year-old actor Jamie Foxx. It seems that the two have become pretty attached. Earlier in August, Foxx was seen at Holmes' house and he had brought some gifts and treats for Suri. The Oscar-winning actor and Holmes have tried to keep their affair under the covers as much as possible but continue to spend a lot of time together.

It has been five years since Holmes and Cruise got divorced and according to reports, Holmes had to sign a clause in her divorce settlement that prevents her from embarrassing Tom in various ways, like discussing him in public or his Scientology methods or dating someone publicly. She is allowed to date but it has to be a hush-hush affair. Also, she is apparently not allowed to bring any of her boyfriends near their daughter. According to sources, Holmes had to agree to the terms as she wanted to get rid of him immediately. 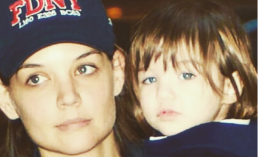 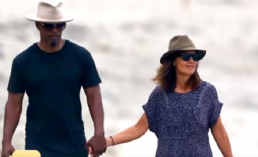