It was very obvious that the message was a direct response to Ayesha as she had shared this bit of information about his hubby loving her feet. She had said during an appearance on The Real,"My husband really loves my feet," explaining as to why she had a photo of her feet on her phone. Khalifa is now being slammed by fans, who had gone out all the way flirting with the 28-year-old player publicly. Some Twitter users said that he was a married to a beautiful woman '@ayeshacurry, so zero chance. Try Nick Young.'

An insider has said that Ayesha is as livid as the fans after Khalifa's picture was posted, she has said that it was extremely disrespectful and although Mia acts like she is not a pornstar anymore but the low-class moves show her true colours, she added.Ayesha also said that she could not believe in this day and age where women are being harassed sexually, they should support each other rather than behave like this. The insider added that Mrs. Curry will not play any games and if her marriage is not respected by Mia then she will deal with it in her own way.

Khalifa has currently teamed up with former basketball ace Gilbert Arenas for Complex's and is hosting a new talk show called,Out of Bounds on Complex News' YouTube channel. 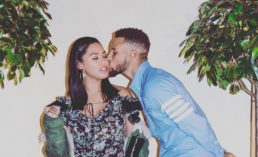