Late night talk show host James Corden has been presenting the highly entertaining Carpool Karaoke which is a feature segment in The Late Late Show with James Corden. It has become such a huge YouTube viral hit that it shows no signs of stopping.

As long as there are superstar recording artists willing to ride along with Corden, the vocally-talented British tv host will never run out of carpool mates to invite. Its premiere on CBS in March 2016 was very memorable, with Jennifer Lopez as the first guest.

Pink Carpools While Singing With Corden

The fiery pop/rock star, who has sold over 47 million albums worldwide sits beside host James Corden at the front passenger seat that was sat on by other famous singers.

Here is a recap of the latest carpool karaoke segment with guest star Pink.

What About Us - They both unexpectedly nail vocal harmonies during some parts in the song. Then Pink breaks out into a dance routine during the chorus. The brit host freaks out with the idea of keeping up with the choreography, prompting him to stop the song midway.

Corden had to stop the car so Pink can teach him her dance moves.

Get The Party Started - Corden then plays the classic 2000 hit while he makes interpretative hand movements that go with its lyrics.

Beautiful Trauma - Then the title track of Pink's latest album release overtakes the car. Once again, impressive harmonies were accomplished in certain parts of the chorus of the song. Both carpoolers are amping up the track's intensity with dramatic arm movements.

Raise Your Glass - Pink does air guitar moves during this number, much to the audiences' delight. A few fist pumps up in the air completes the party atmosphere.

Quick Pink Anecdotes in Between Hits

When she was about 7 or 8 years old, Pink recalls being in love with 80s rock legend Jon Bon Jovi.

She also reveals when she was only 19, she opened for the hugely popular boy band group N'SYNC. It was her very first tour in her singing career that she embarked on. 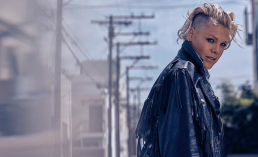 Pink Reveals How She Wrote 'What About Us' 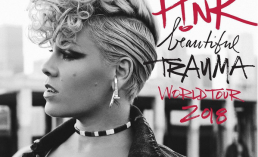 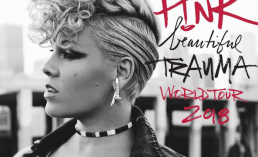