Rose McGowan has been at the forefront of the #MeToo movement from the beginning. The actress has spoken several times on the abuse and assault she endured from disgraced Hollywood mogul Harvey Weinstein.

Whether it was speaking her mind on her social media accounts or meeting with other victims who also accused the producer of sexual misconduct, McGowan has not been afraid of making her voice or her opinions heard. After facing backlash and criticism from certain individuals in Hollywood, it looks like McGowan is getting the platform she's fought hard to obtain.

The actress will be heading over to E! for her own documentary series that she will produce and star in.

The former Charmed actress's newest project, Citizen Rose, is set to air on Jan. 30. The five-part docu-series will follow McGowan's ongoing activism in exposing men in Hollywood who have used their powers for their own malicious purposes.

"You are formally invited into my mind and world. I am thrilled to partner with E! to amplify my message of bravery, art, joy and survival," McGowan stated.

McGowan claimed Weinstein raped her back in 1997 during the Sundance Film Festival, and when she complained about it, Amazon Studios dropped her project. The actress also claimed that she was one of the eight women who settled with Weinstein outside of court.

In addition to accusing Weinstein of rape, she has also accused other men in the industry, one in particular being Ben Affleck, of knowing what Weinstein did to her and doing nothing about it.

The Scream actress will also be releasing her book, Brave, on the same day the documentary will air.

Executive Vice President of Development and Production Amy Introcaso-Davis spoke about the effect McGowan's decision to speak out had on others who also decided to publicly out their abusers.

"We look forward to taking viewers inside this talented, dynamic woman's world as the first allegations unfold and she becomes a leading voice in a critical cultural change," Introcaso-Davis commented.

McGowan was named one of Time Magazine's People of Year in 2017 along with Ashley Judd and Taylor Swift who were nicknamed "The Silence Breakers." McGowan met with Weinstein's other accusers, Asia Argento and Annabella Sciorra, during Thanksgiving weekend in 2017 and interviewed other women who accused men of sexual assault in December 2017. 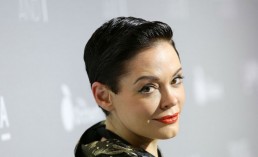