Walking down the Oscars red carpet can be particularly tiring, but American-Mexican film actress Salma Hayek knows how to pamper herself even during the awards ceremony.

In an Instagram post, Hayek snapped a photo of her foot having a massage while sitting on her seat at the Oscars night.

Hayek did not mention who was giving her a massage, but fans have assumed it was her husband, François-Henri Pinault.

Hayek, 51, also took the time to take pictures of her and friends, Gina Rodriguez of Jane the Virgin and her boyfriend, Joe LoCicero.

This year's theme of the 90th Academy Awards focuses on equality and diversity, especially in the entertainment industry. Last year, Hollywood was shaken by complaints of sexual assaults and harassment by people who have worked in the business.

On the Oscars night, Hayek presented a video on equality and representation alongside Ashley Judd and Annabella Sciorra. Both Sciorra and Judd have revealed instances of Harvey Weinstein's harassment against them.

"It's an honor to be here tonight. This year, many spoke their truth and the journey ahead is long, but slowly a new path has emerged," said Sciorra, who plays a role in the movie What Dreams May Come.

"The changes we are witnessing are being driven by the powerful sound of new voices, of different voices, of our voices. Joining together in a mighty chorus that is finally saying time's up," said Judd.

Hayek also extended her gratitude to people who chose to get past the race, gender, and ethnicity stereotypes to share their personal experiences.

In an opinion column for the New York Times, Hayek shared her account of sexual assault by Weinstein during the shoot of the 2002 film Frida. She detailed that the producer threatened to kill her if she refuses his sexual advances.

Hundreds of people have flocked the streets of Hollywood in late last year to protest against the sexual abuses and assaults suffered by celebrities and production crews. Campaigns such as Time's Up, Never Again, and #MeToo were formed to empower other victims to come out and share their experiences.

Weinstein, 65, was charged with at least 10 accounts of sexual assaults in the United States and the United Kingdom. Casey Affleck was also charged with sexual misconduct but has since denied the allegations. The case has already been dismissed following Affleck's settlement with the complainant. 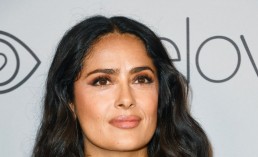