Khloe Kardashian may be a Calabasas native but she hasn't exactly loved living in Los Angeles, California while she is pregnant.

Khloe Loves Being In Cleveland

The expectant mom has actually preferred to live in Cleveland, Ohio, where her boyfriend, NBA player Tristan Thompson, plays for the Cleveland Cavaliers.

A source close to the Keeping Up With the Kardashians star explained that the reality star loves Cleveland because it is more low-key than Los Angeles and is less stressful.

"She very much enjoys Cleveland. She can go without being photographed. No one judges her. She loves it!" the source said.

As previously reported, now that the Good American designer is in her third trimester, she has begun nesting in Cleveland as she plans to give birth in the state.

Fans of Kardashian know that all of her family are based in Los Angeles but they have no plans on missing the birth of her first child. The extended Kardashian-Jenner clan plans to fly out when it's baby time.

The first-time mom probably also enjoys living in Ohio because in the past she had said that Thompson always made her feel right at home.

When she confirmed that she was with child in December 2017, Kardashian also revealed that she celebrated Thanksgiving and Christmas in Ohio instead of in Calabasas with her family.

Keeping Up With the Kardashians fans know that the mother-to be is presumed to welcome a baby girl sometime in April. Kardashian's little sister, Kylie Jenner, was actually the one to reveal the big news to her on the season finale of their E! reality series.

As Kardashian and Thompson gear up to welcome their daughter, the duo recently posed for a series of black and white maternity photos. The Revenge Body shared all of the photos from the photo shoot on her official website. She also gave her fans a preview of the shots on Instagram.

In one of the photos, the couple is gazing through the window as Thompson cradles Kardashian's baby bump. The first-time mom wore a black lace push-up bra with black underwear and a black silk robe, while Thompson appears shirtless with black pants.

"Mommy and Daddy @sashasamonova," Kardashian labeled the image along with a camera emoji.

Along with her maternity shots, the denim designer also shared the traits she hopes her daughter would inherit. 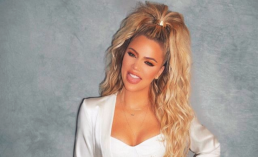 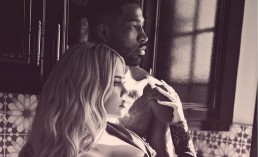 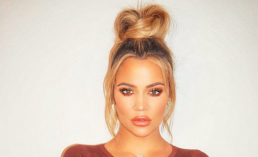