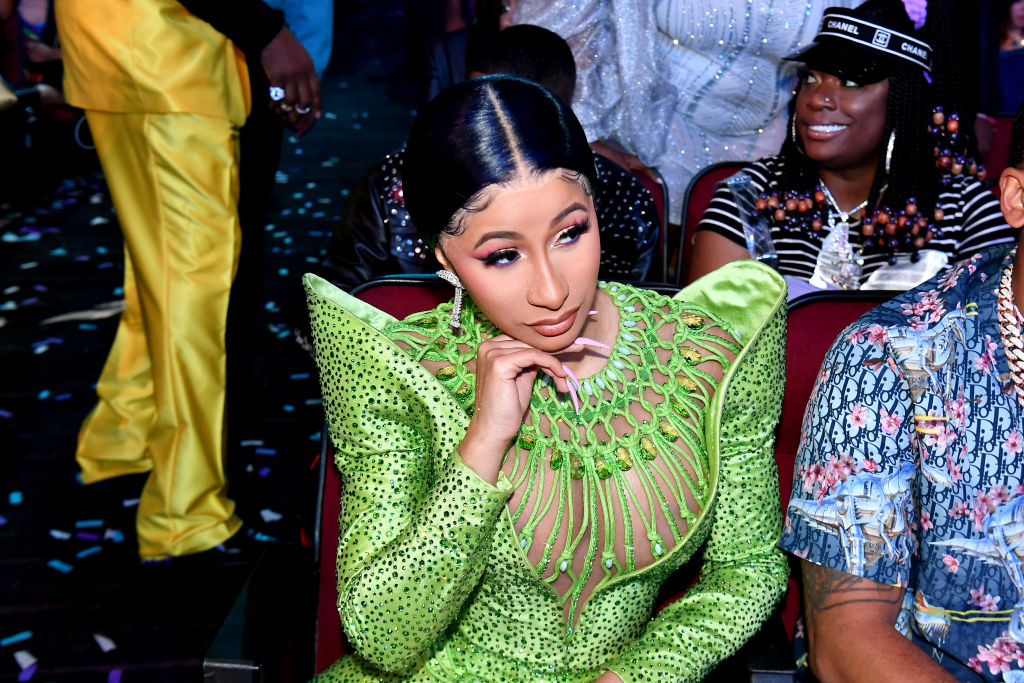 Kylie Jenner and Cardi B may be from opposite sides of the entertainment world, but aside from being hot and fashionable, these ladies also have another thing in common: they have the cutest daughters that the internet could not resist.

While these hot mommas are certainly not having a competition between their adorable babies, their recent Stormi and Kulture social media updates could be the round one of the "who did it better" toddlers edition.

It is after both moms showed off how their 2-year-old girls rock luxury bags at a very young age.

On Wednesday, the 22-year-old makeup mogul took to Instagram to give her 185 million followers an update on her daughter, Stormi.

In the photo, Stormi seemed to be enjoying some time under the sun while seated outside her momma's million-dollar mansion. The little girl was sporting an all-white casual ensemble paired with a colorful scrunchie to complete her look.

But what caught the Instagram users' attention was Stormi's on-point summer accessory: a white Louis Vuitton mini handbag with its iconic monogram and flower-like design stamped all over in fresh summer colors.

"Coolest baby to ever do ittt," Kylie wrote, adding some heart emojis.

According to the Louis Vuitton website, the tote -- which is a perfect miniature version of the iconic Speedy bag -- retails for $1180, which we all know, is just a pinch of Kylie's wealth.

But less than 24 hours after Kylie declared Stormi as the "coolest baby" clutching a Louis Vuitton bag, rapper Cardi B showed how her baby daddy do it.

On the other side of America, Cardi B's husband, Offset, just showered their daughter Kulture some love by giving her a pink Hermes Birkin for her 2nd birthday.

In an Instagram post on Thursday, the 28-year-old rapper shared a clip showing how he surprised Kulture with a luxury handbag.

In the video, the cutie Kulture was wearing a pink fairy costume as her dad opened up an iconic orange Hermes box and revealed a bubble gum pink colored Berkin bag, which reportedly costs around $8,000.

Mommy Cardi filmed the father-and-daughter, which Offset later on captioned: "Late is better then never I Birkin my baby."

The little girl immediately tried it on while her dad joked: 'OK, girl! I see you, beautiful baby."

Cardi B and Kulture clearly won this baby handbag round against Kylie and Stormi. And while there is no competition going on, it is lovely to see how these little girls slay just like their mommas.

But the high fashion mommas were not able to escape internet scrutiny, as they were slammed for giving their kids expensive bags that they don't need.

Cardi B recently defended her husband for his lavish gift and hit back at haters. The "Bodak Yellow" rapper argued that they just wanted their kid to look as polished as their parents, especially when they are seen out in public.

"And if I'm fly and Daddy's fly, then so is the kid," Cardi said in her Instagram story entry.

"It's not up to what the kids like. If it was the kids, they'd be outside in diapers. Because if I was looking like a bad b**ch, expensive b**ch and I have my kid looking like a bum bum, then y'all would be talking s**."

READ MORE: Kanye West Is NOT Backing Out Of Presidential Bid -- Here's The TRUTH!