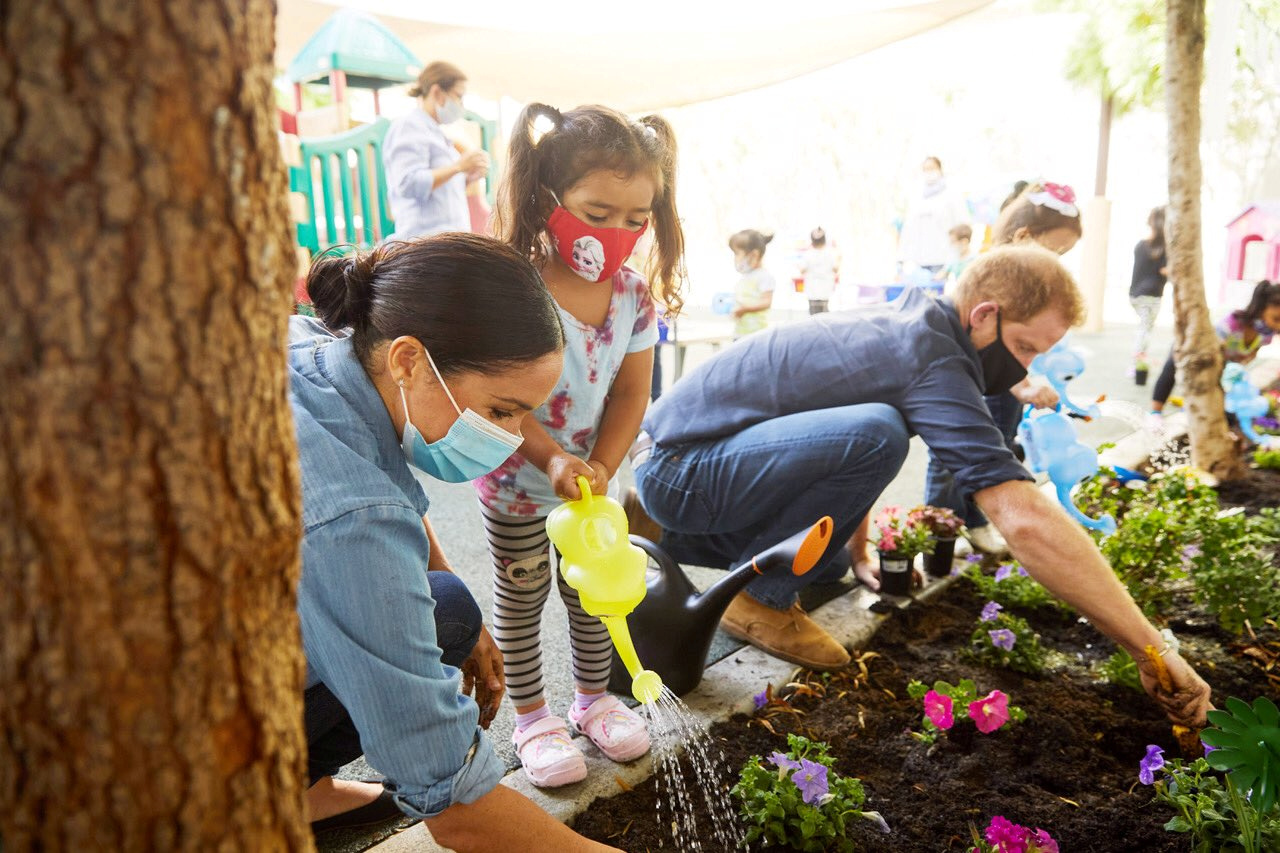 After spending months in quarantine, Prince Harry and Meghan Markle were once again seen in a public engagement even after stepping down as senior members of the Royal Family.

On Monday, the Duke and Duchess of Sussex visited the Assistance League Preschool Learning Center in Los Angeles during the 23rd death anniversary of Prince Harry's mother, Princess Diana.

To remember the late-Princess of Wales, the Sussexes planted some Forget-Me-Not seeds, which is said to be Diana's favorite flowers. The couple planted it on the school's garden, which has been providing early education service to students ages 3 to 5 that come from low-income families.

Prince Harry and Meghan Markle were photographed planting the flowers next to children. Aside from planting, the couple also played nursery rhymes and read books about gardening, vegetables, and planting.

The ex-royals visit took place in the school's outdoor area, and they both use face coverings while interacting with kids in observance of COVID-19 safety protocols.

The children of our Preschool Learning Center got a wonderful surprise when The Duke and Duchess of Sussex visited yesterday! ️ pic.twitter.com/DsKeUmqDRP — Assistance League LA (@TheLeague_LA) September 1, 2020

However, Sussexes' latest decision to visit the childcare center sparked fiery among parents subjected to the rules of not accompanying their kids to school no matter how young they are to avoid spreading coronavirus.

Because of this, the angry parents accused Prince Harry and Meghan Markle of breaking safety protocols as the threat of coronavirus is still present worldwide.

Furious parents took to Twitter to express their outrage against the ex-royal couple.

"I could not even hold my daughter's hand and take her into school last week when she started kindergarten. These two just 'turn up and break the rules whenever they feel like it?" one Twitter user wrote.

"They have no respect for the rules as they are 'humanitarians' they are the exception?" another one added.

Some parents slammed the Sussexes for risking the children's safety just for the sake of a good photo.

Meanwhile, others could not fathom why Prince Harry and Meghan Markle would have to get in close contact with children during the reopening of class.

"And why, if the school children's own parents aren't allowed inside due to COVID, they are there, with their photographer??" another fan wrote.

According to Express, the Los Angeles County Department of Public Health recently updated its COVID-19 guidelines for education providers and early care sites.

The guidelines order the establishments to modify daily operations to minimize exposures, including preventing parents from coming into the childcare center.

Meanwhile, other California countries are encouraging parents to stay out of the building premises when dropping off their children to school.

"Parents or other individuals dropping off or picking up older children or youth by car should be encouraged to remain in their vehicles to the extent possible," Santa Clara County guideline reads.

"If in-person drop-off or pickup is necessary, only a single individual should drop off or pick up the child/youth," the guidelines added.