It seems like every week, something headline-worthy happens on "Dancing With the Stars" or with Tyra Banks.

On Monday night's episode, the former "America's Next Top Model" host made a horrifying mistake on the show.

"This is live, right? This is the craziness of live TV," the 46-year-old said when she realized her blunder.

She continued to work her way through the list when she reached the final three couples on the dance floor: Anne Heche and Keo Motsepe, Chrishell Stause and Gleb Savchenko, and Vernon Davis and Pita Murgatroyd.

"There's actually been an error," Tyra could be heard saying as the three couples are seen on the camera shot, which was supposedly going to be just two.

The entire confusion later sent the final moments of the show into a crescendo, as Tyra Banks relayed viewer voting results and stated who was safe from Monday night's elimination.

She later clarified that the bottom two couples were Heche and Kotsepe and Monica Aldama and Val Chmerkovskiy.

"Please have Monica come back. There has been an error in our control room, but we're making it happen," Tyra Banks said.

Bruno Toniolo, a judge on the show, later chimed in and reminded the contestants that "nobody is infallible."

In the end, Monica Aldama and her partner Val Chmerkovskiy were saved from elimination while Anne Hecke and Keo Kotsepe were sent home.

Heche didn't even have a chance to say goodbye to the cast before the closing credits rolled.

Viewers at home were quick to judge "Dancing With the Stars," particularly Tyra Banks, for the live TV miscue.

Many fans went as far as to say that this wouldn't have happened if former hosts Tom Bergeron and Erin Sanders were still on the show.

"Bring them back!! Tom wouldn't have screwed up! You guys ruin good things by letting go the real hosts. They had chemistry! Tyra just pulled a Steve Harvey," one Twitter user said.

Another one tweeted, "Tyra Banks has ruined DWTS. Congratulations."

One Twitter user confessed she might not be watching the next few episodes of "Dancing With the Stars."

"Really tried give Tyra a chance but she is just not right to host. There is no comparison with her and Tom and Erin. Have not missed a season yet but this could be my last if Tyra continues."

While another one said that Tyra should stop asking personal questions as she is "not a therapist."

"Maybe if Tyra didn't talk so much, she wouldn't have to RUSH to elimination," another one said, with a GIF that says "Shut up."

Aside from Tyra Banks' live mistake, her choice of wardrobe and hair and makeup were also mocked online. 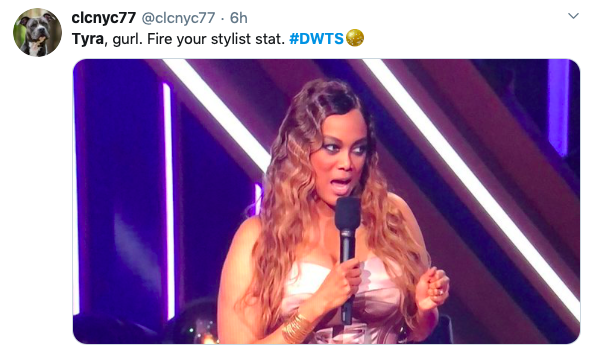 "Who in the hell told Tyra this looked good? I just want to talk," another person tweeted, along with pictures of the model from the show.

Tags: Dancing with the Stars dwts tyra banks Monica Aldama Val Chmerkovskiy
© 2021 EnStars.com All rights reserved. Do not reproduce without permission.
Most Popular
You May Also Like

Tyra Banks is experimenting on so many different looks even before joining "Dancing With the Stars." After all, she is a supermodel.

Julianne Hough reportedly had many lip fillers that she became "almost unrecognizable."

Meghan McCain's time on 'The View' recently ended but her television career is far from over as she was reportedly getting a new show offer from Tyra Banks; is this true?

Carrie Ann Inaba Set To Return on DWTS, But May Leave 'The Talk' Permanently -- Here's Why

Last week, Carrie Ann Inaba announced that she was excited to be part of CBS' new season of "Dancing With the Stars."

Tyra Banks Will Return On ‘Dancing WIth the Stars’ Season 30: Why Fans Are Not Happy With the News

"Dancing With the Stars" gets renewed for a season 30, and fans are rejoicing. However, not many are okay with Tyra Banks returning on "DWTS."

Brian Austin Green and Sharna Burgess shared a couple of details about their new romance, gushing about their unique connection.

Witney Carson Officially a Mom! 'Dancing With The Stars' Pro Gets Best New Year Gift Ever

Brian Austin Green has found his silving lining this 2020 through Sharna Burgess.

'Dancing With The Stars' Pro Slapped With Damaging Accusation

"Dancing With The Stars" pro Gleb Savchenko responds to what he says as "false accusations" his wife made.