Nearly 98% of Americans aged 18 to 49 snubbed the recent Grammy Awards, which received the lowest viewing ratings in the show's history, data from Nielsen show.

Although the ceremony of the 63rd edition of the show held March 14 in Los Angeles had many highlights, it did not appeal to American television audiences.

According to Nielsen reports, only 8.8 million people watched the Grammy Awards live this year, down 53% from 2020. 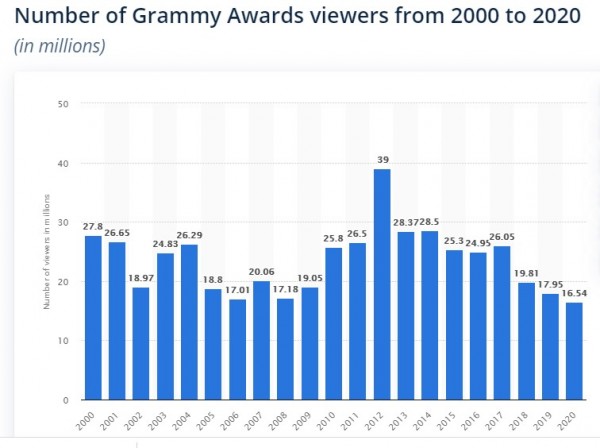 Read Also: Who Has the Most Grammys? No, It's Not Beyonce!

The 63rd edition's ratings are especially poor for Americans aged 18 to 49, with just 2.1 percent viewing the event on NBC or online. In contrast, only 5.4 percent of them watched the 2020 ceremony.

The Grammy Awards 2021 hosted by Trevor Noah aren't the first recent US award show to suffer a ratings decline, now all blamed on to the COVID-19 pandemic.

The Academy of Motion Picture Arts and Sciences and the ABC network are concerned about the downturn in ratings as they prepare to host the forthcoming Oscars on April 25 in Los Angeles.

While the pandemic could have played a role in the scaled-down viewers ratings, others also would argue that the ratings clearly reflect the Grammys' and other award shows' (in their present formats) diminishing importance.

Tags: Grammy Awards 2021 2021 Grammy Awards Grammys
© 2021 EnStars.com All rights reserved. Do not reproduce without permission.
Most Popular
You May Also Like

Not only did Harry Styles opened the ceremony, but his ex-girlfriend Taylor Swift also looked positively happy to see that he took home his first-ever Grammy Award for Best Pop Solo Performance for "Watermelon Sugar."

Drake joined a slew of celebrities who called out the 2021 Grammy Awards after snubbing Black artists.