While fans are excited to see Lady Gaga team up with Adam Driver on a new movie, the relatives of the characters they are portraying are slamming their upcoming project.

Ridley Scott is directing "House of Gucci," with a release date in November 2021.

Many are excited for the highly-anticipated crime movie to be released, but the heirs to the famous Gucci clan have aired their concerns about their family's depiction in the film.

The great-grandchildren of the fashion empire have appealed to the filmmaker to respect their family's legacy in the upcoming movie, focusing on a sensational murder.

"House of Gucci" is based on a book about the 1995 murder-for-hire of one of Gucci's grandchildren, Maurizio, and the aftermath, which includes the trial and conviction of his ex-wife, who served 16 years in prison.

Patrizia Gucci, Maurizio's cousin, said in a statement to the Associated Press how truly disappointed they are with the project.

She explained, "They are stealing the identity of a family to make a profit, to increase the income of the Hollywood system."

"Our family has an identity, privacy. We can talk about everything. But there is a borderline that cannot be crossed."

Patrizia also admitted that she reached out to the director and his wife, who they have previously met with other Gucci family members, but have heard no response from the couple.

Furthermore, Patrizia is threatening to take further action after viewing the movie.

What The Gucci Family Hate About Ridley Scott's Movie

Some of the family's issues range from the casting of actors, the lack of communication the production company has had with the family, and several inaccuracies in the book where the film is based.

In paparazzi pictures published, Patrizia stated that his grandfather "was a very handsome man" and described him to be "very tall," have "blue eyes," and "very elegant." 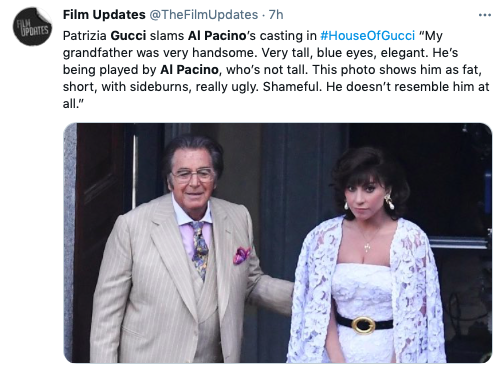 She then went on to slam Pacino, saying, "He is being played by Al Pacino, who is not very tall already, and this photo shows him as fat, short, with sideburns, really ugly."

"Shameful, because he doesn't resemble him at all."

She also wasn't happy with how Jared Leto is portraying Paolo Gucci. In paparazzi pictures, he had unkempt hair and wore a "horrible, horrible" lilac suit, something Patrizia said that offended her immensely. 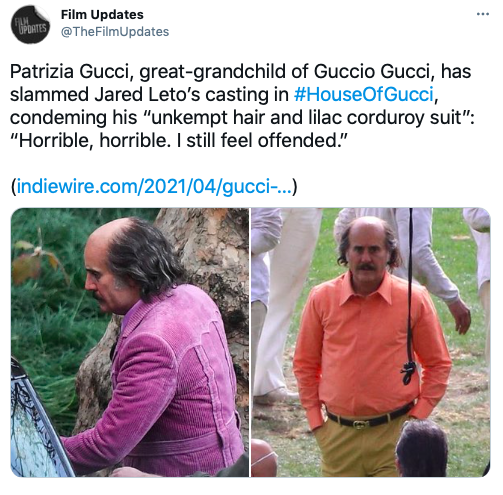 However, the Gucci president and chief executive Marco Bizzarri told Women's Wear Daily that the label gave the movie "total creative freedom" by "providing access to the house's historical archive and wardrobe and props."

The entire Gucci family hasn't been involved with the fashion house since 1993, after Maurizio Gucci sold his shares to Investcorp, with Gucci later bought by French group PPR, now known as Kering.

READ MORE: Is Johnny Depp Going To Be On 'Pirates of the Caribbean 6'? It's Possible!

Harry Styles Heartbreak: New Movie In Crisis But Reveals Where He'll Be Seen Next

Gucci released another chic item for their consumers, but netizens found the price tag unbelievable.

Lady Gaga has signed on to play the murdered heir's wife to the Gucci fashion empire, with the legendary Ridley Scott to direct the upcoming crime drama film.

Rihanna wore thigh-high baggy Ugg boots at Coachella that received different reactions from fans. There were those who praised the singer for pulling off the look while others made a joke of her outfit. .

Rihanna greeted her 30th birthday in a hilarious and unusual way, which was to wear a shirt that says 'I hate Rihanna.' She also took to Instagram to thank her mom for her efforts.

The Gucci runway caught everyone's attention with a backdrop inspired by murals and monuments all over the world. The runway featured three arches in Aztec and Egyptian styles including the stunning India Gate

Kate Middleton will be appearing for the last time before giving birth at the naming of a cruise ship in Southampton on June 13, and reports have been discussing what she will wear for the grand outing.