The drama exploded on social media after Lay Lay wrote in a now-deleted post on Instagram, "@kimkardashian texted me to take down the new TikTok video with North in it. I don't know why... They invited ME to their house. This industry SUCKS! I asked what did I do wrong and they didn't answer me. So confused on what this industry is... just trying to make good positive music."

On the other hand, the Kardashian camp argued that the takedown request came after the video was recorded without permission from parents of North West. Furthermore, the video was supposedly used "in a professional capacity."

Now, Lay Lay had the chance to clear the air with Audacy V-103 host Big Tigger, first clarifying that her Instagram page is run by her parents - specifically her dad, Acie. She then told Tigg that she did visit the Kardashian residence twice and recorded videos showing North West dancing to her songs and that Kim's team approved the videos for social media posting. 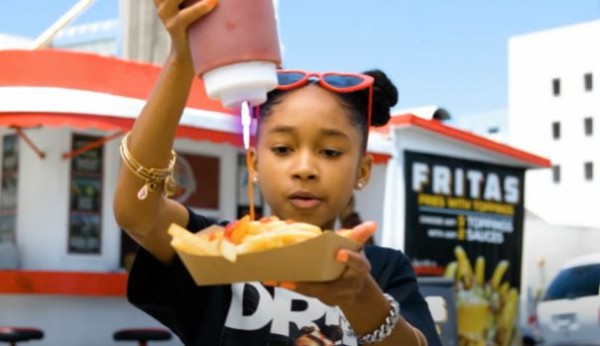 "The second time, we did the same thing that I did the first time, which we made TikToks and videos, which they said that I was secretly recording- which is not true," the 14-year-old rapper said in her Audacy interview. She continued she was around the nanny and security personnel, stressing that everybody knew she was recording.

Furthermore, the young rapper noted that she particularly went to the Kardashian home to make TikTok videos with North. "We didn't think anything of it for them to say that I couldn't post the dancing video because I already posted two [other] videos. We didn't think it would be a problem this time," she said.

When the video was requested to be taken down, she said that it was her "overprotective" father who expressed frustration on Instagram and that she actually asked him to take it down. While it took some convincing, Lay Lay told Big Tigger on Audacy that the post was taken down before it went viral.

Watch the music video for the latest That Girl Lay Lay track, "Age Ain't Nuthin' But a Number," below:

Tags: North West Kim Kardashian audacy
© 2021 EnStars.com All rights reserved. Do not reproduce without permission.
Most Popular
You May Also Like

Kim Kardashian is pissed after many people found hard to believe that her 7-year-old painted the Bob Ross-Esque landscape.

Kanye West is in hot water again after his shocking revelation about Kim Kardashian and their daughter, North.

It's now hard to imagine a world without a certain Kim Kardashian West and her entire family.

People are sending a lot of hate to Kim Kardashian West or sharing a photo of her eldest child, North, looking completely like she has photoshopped her.

As per the source, Kanye West is REALLY getting on KIm Kardashian West's nerves.

Behind those picture-perfect Instagram feed, blowout hair and stylish #OOTDs, Kim Kardashian is just like a normal person coping up with quarantine.

On Monday, the eldest daughter of Kim Kardashian and Kanye West made a surprise performance at her father's Yeezy Season 8 event at Paris Fashion Week.

After giving her 160 million Instagram followers a tour of their massive fridge and her kids' enormous playroom, Kim Kardashian-West now proves that she is more than just a social media star, a mom, and an entrepreneur.