Since stepping down from their senior royal rules, Prince Harry and Meghan Markle are expected to be extremely rich thanks to their brand new "Sussex" brand.

Their brand is now worth estimated to be worth $344 million.

The Duke and Duchess of Sussex have signed a multimillion-dollar partnership with Netflix, Apple, and Spotify and recently took a new job in banking.

According to branding expert and founder of Frank PR Andrew Block, "Since moving to California and stepping down as working royals, Harry and Meghan have secured a number of lucrative business deals and personal endorsements which have seen their personal wealth rocket."

He went on to say that Prince Harry and Meghan Markle are "really making the most of their new-found status" as well as "their potential to become the world's richest personal brand" to become achievable.

"Them becoming a billion-dollar brand is certainly not out of the question. The sky is limitless."

The Duke and Duchess of Sussex are reportedly making a lot of effort to stay commercially relevant.

However, a royal commentator believes that the tasks will be "no easy feat."

Prince Harry and Meghan Markle recently appeared at a live event in New York to raise awareness for the COVID-19 vaccine.

The couple's charitable endeavors have been at the core of the Duke and Duchess of Sussex's work since stepping down from the royal family in 2020, and since then, they have been working hard on their non-profit organization, Archewell. 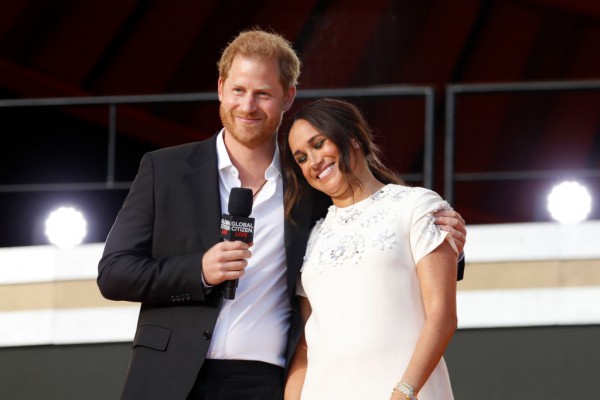 READ ALSO: Queen Elizabeth II Forced To Give THIS Up Not Solely Because of Health Concerns

Inside Archewell, they have other projects, such as a media branch that is intended to make content for their Netflix and Spotify deals.

But the deal wasn't immediately accepted by the public because it raised some eyebrows, especially since they "unbridled themselves from family and tradition."

Jack Shafer explained that the couple's quest to remain relevant after their royal family duties will undoubtedly be difficult.

"Having moved their act to an international stage, Meghan and Harry have not obliterated their publicity and autonomy problems."

He added that there are a lot of bigger filmmakers and podcasters in the world that the couple will be competing with that "they'll have to produce great content for Netflix and Spotify before their novelty wears off. That's no easy feat."

Meghan Markle is pursuing her post-royal career with vigor.

When Prince Harry and Meghan Markle perform a second round of this, it's said that Queen Elizabeth II and the rest of the royal family will lose it.

When their relationship didn't work out, Prince Harry's previous girlfriend allegedly felt like she had escaped a bullet.

Prince Harry and Meghan Markle sparked divorce buzzes after the Sussexes reportedly had their "worst fight ever."

The 'New Princess Diana' Named But It's Not Meghan Markle, Kate Middleton or Sophie Wessex [REPORT]

The "New Diana" has been identified, and it is not any of the ladies who were first suspected.

Meghan Markle Has Higher Rank Than Prince Harry In The US? Viewers Notice MAJOR Royal Blunder

Now that they've moved to the United States, does Meghan Markle have a higher rank than Prince Harry in terms of royal precedence?

Meghan Markle has been warned that if individuals don't stop doing anything that would permanently disgrace her, her reputation will suffer.

While some viewers applauded Meghan Markle for being a great with the prank, possibly forgetting that she was an actress before becoming a royal and ex-royal, others described the whole affair as cringeworthy, pointing out all of the strange things that came with the prank and the interview.