Awkward is Awesome: Aubrey Plaza Proves the Power of Weaponizing Your Awkwardness

"If you feel like a weirdo, it's okay because weirdos rule the world." - Aubrey Plaza

We all have our awkward moments: the moments where you overshare in a conversation, go in for a hug that was meant to be a handshake, or (totally hypothetically) do a fist-bump-and-slow-motion-explosion-and-walk-away-quickly to a guy that asks you thereby forcing them to text you, "Was that a...no?" Like most other things in the world, social awkwardness is a spectrum, ranging from an uncharacteristically quirky instant in an otherwise perfectly cool life to the never-ending onslaught of well-that-was-weird kinds of moments.

People often conflate awkwardness with a lack of confidence. They paint it as a flaw, bundling it up with the problematic Manic Pixie Dream Girl trope, looking at a socially awkward individual as someone that needs to be saved and set back on the socially acceptable path. That individual is viewed by society as having, to quote New Girl's City Councilwoman Fawn Moscato, "the confidence of a child that was raised in a basement." In actuality, it is this social arbiter who tells the awkward person that they have a problem. The lack of confidence comes when the world demands that the awkward person change to fit their narrative of what a successful, competent, and confident person acts like. Society simultaneously condones marching to the beat of your own drum while condemning the socially awkward- treating awkwardness as a behavioral problem that needs to be overcome if a person wishes to make anything of themselves. Asking someone to fix their off-beat demeanor is the equivalent of telling someone LOVE YOURSELF (but change who you are before you do). Quirky individuals around the world have heard some variation of the INCREDIBLY helpful advice: Be more confident in yourself. Then you'll be less awkward. Okay...but what if I'm CONFIDENT that I am awkward?

(Before you assure me I'm not, I should let you know that I'm not complaining.)

Contrary to what every B-List-DCOM of the last twenty years would lead you to believe, many of the most successful people in the world are those who confidently embrace their awkwardness. Psychologist Ty Tashiro, author of the book Awkward: The Science of Why We're Socially Awkward and Why That's Awesome, pointed out in his 2018 TEDx Talk that,"the same traits that make people socially awkward are the same psychological characteristics that can power them towards extraordinary achievements." Tashiro makes the point that awkward people tend not to naturally conform to societal expectations and while that may seem strange to many, raises the important question, "if awkward people aren't looking the same place everyone else is looking, well then what are they looking at?" Hollywood is filled with people that have confidently embraced their awkward from Issa Rae (whose first show was called The Misadventures of Awkward Black Girl) to Awkwafina (whose name is a product of being called awkward) The unique outlook, specifically excitable passions, and individualism prove that awkwardness, when a person knows how to wield it, is undeniably a strength. One of the best examples of the power of weaponizing awkwardness: Aubrey Plaza. 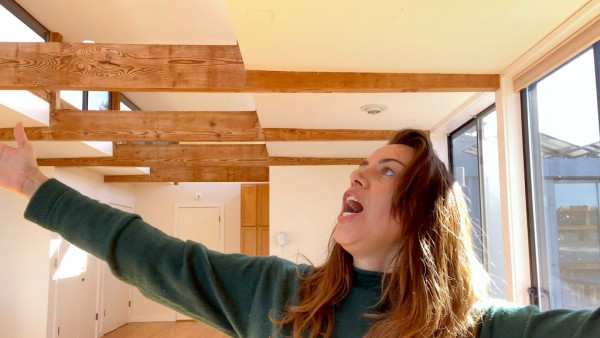 The Parks and Recreation star has made a career out of her individualism and awkwardness. When Conan O'Brien opens his interview with Plaza, "Thanks for being here," the star replies, "Yep." The response is met with laughter as Conan himself points out laughingly, "'Yep' is not the correct response!" She does not force herself to conform to the Hollywood standard. She embraces who she is, and that has made all the difference. Recently she went on talk shows across various networks dressed as a witch to promote her new book The Legend of the Christmas Witch. Plaza is confidently awkward and unabashedly herself in an inspiring way. Here are eight lessons we can learn from Aubrey Plaza about the power of embracing your awkwardness.

Awkward people are often known for taking an awkward situation and making it even more awkward. While many may consider this a weakness, it is actually the strength that got Plaza her role as April Ludgate on Parks and Recreation. The casting director called Michael Schur saying, "I just met this girl and she's the weirdest person I've ever met." Schur reflected, "Seemingly about eleven seconds later, Aubrey Plaza showed up in my office and for an hour made me more uncomfortable than I've ever been." This inspired Shur to write the young actress into the pilot of the show. If she, in this high stakes moment where many of us would be inclined to crush our awkward proclivities, shut down this part of herself, she would not have the career she has today.

2. "When You Have Nothing to Lose It Actually Works in Your Favor"

People often attach their pride to the success with which they can carry themselves normally in society. However, by relieving yourself of that burden, the world of opportunity opens. Aubrey Plaza followed Adam Sandler the fourth time she ever did stand up comedy, and, she said, it surprisingly went really well. She didn’t expect it to go well, but she did not let this change her. She went out, was herself, and found, “when you have nothing to lose it actually works in your favor.” The confident way with which she carries herself, undaunted by stakes or public opinion, is the reason that she has been able to go from waitress to superstar seemingly overnight.

3. Commit to the Bit

aubrey plaza i have feelings for you please give me a chance pic.twitter.com/2k7dXxERbG


When you accept yourself, and all of the awkwardness that comes with you, you are better able to surprise and delight people in unexpected ways. Plaza is known for her unique sense of humor, which is undoubtedly born from an unapologetic acceptance of herself. Michael Schur's favorite blooper from Parks and Recreation is from an improvisation by Plaza (captured above). Her unique way of processing and interacting with life makes her the comedic powerhouse she is. When you lean into your awkwardness, you harness the power of the unexpected. Like a magician...of awkward!

4. Be Bold and Go for What You Want

There is a certain boldness that inherently comes with defying conventional norms. However, in the eyes of society that boldness is often mocked or pointed to as a problem that needs fixing; while, in fact, embodying this boldness could be your greatest asset. Confidently accepting your social abnormality while keeping focused on your goals is a recipe for success. Aubrey Plaza is a perfect example of this. When she auditioned for Dirty Grandpa, they wanted her to audition for Zac Efron's love interest. Instead, she knew she wanted to play the woman that slept with Robert De Niro (because when else would that happen?) The actress went in and (as the script stated) flashed her butt at the casting team. This unconventional move got her the part. Be bold. Be yourself. Be like Plaza.

In constantly striving to be "normal", it can be tempting to squash down the unique takes and opinions you may have. However, by taking these unique takes and merging them with the hyper-focused intelligence that most awkward people have (according to Tashiro), you have the capacity to be the most entertaining one in the room. Everyone loves to hear things that they would not have thought of themselves. By using her distinctive voice to share her humor and opinions about the industry, she got a room full of Hollywood professionals genuinely laughing. Confidently command a room the way only the exceptionally awkward can. Plaza proves it's awesome!

6. Be Ready for Anything

People have rituals before going to bed. They will set their alarm, plug in their phone, drink water, and read. How many people do you know that, like Aubrey Plaza, sleep with a knife next to their bed in anticipation of the zombie apocalypse? While this may seem a bit strange to most, it speaks to the proclivity of a socially awkward person to be ready for things when others are not. Don't let the world tell you that it's silly to be prepared for the things they think will never happen. There is always a chance. When that random thing you're thinking of happens, you'll be ready!

7. Let Your Past be Part of Who You Are

Most people did not just wake up socially awkward (at least, I don't think so). In fighting to blend into mainstream society, we may try to squelch the memories of past experiences we have had that made us who we are. When we accept these past experiences it only helps us to fully embrace the personhood and power we hold. Plaza used to be an Irish step-dancer, which she had forgotten about until she was asked to start dancing in a movie. The stiffness and rigidity of the form led the actress to the realization, "Oh, that's probably why I'm so awkward and weird." Even the indie film star has an awkward origin story- proving that awkwardness is the superpower we all know it to be!

8. "If You Feel Like a Weirdo It's Okay Because Weirdos Rule the World"

As Aubrey Plaza so eloquently put, "weirdos rule the world." People who are considered socially strange have a far greater chance of rising to the top than those who toe the cool-line. Society won't tell you to be confident in your awkwardness because they know if you do, you could just beat them all. For proof, I give you LITERALLY everything Aubrey Plaza has ever done.

So go forth awkward people: muddle your way through social situations, get too excited about your nerdy passion, wear the thing that hasn't been in style for decades, and trip over your own feet! We know there are great things coming from you!