For the show's premiere which aired on Monday, Oct. 15, Jennifer Aniston sat down and opened up about her engagement for the first time and the biggest shocker was when Oscar winner Sandra Bullock stripped down to deliver a stern message to the late night talk show host.

The Oscar winning star shed her "good girl" image for a profanity-lace skit where she scolded Handler for her being a "huge disappointment."

Sporting dripping wet hair and blue nail polish, the "Blind Side" star addressed Handler about her admitted drinking problem, for having slept with her previous talk show guests and even questioned her hygiene.

Bullock began the verbal attack when she chastised her for calling Bullock "Sandy" and for calling herself the "white Oprah."

"What you need to worry about is pulling your s**t together with this fancy new stage that you have, which I think is a sham," said Bullock. "You have a responsibility to be a respectable talk show host. This comes directly from Oprah's mouth to my ear, to my mouth, out of my mouth, into your ear, down your body, out your vagina, up my vagina and out my a**."

"The overall theme of this message is that you are a huge disappointment. Just because you're the only person on late-night television who has tiny little lady bits does not give you a free pass. You have a responsibility to be a role model to young girls... and you need to lay off the booze."

"I'm not drinking nearly as much as I used to drink," said Handler.

The "Crash" star then slapped Handler in the face and tells her to stop "sleeping with your guests."  "That is why I've not done your show; I do not wanna sleep with you."

''I don't sleep with that many anymore - just some of the rappers," Handler replied. She made a reference to rapper 50 Cent who she dated briefly last year.

Bullock slapped Handler in the face again and demanded she urinate in the shower.

Bullock then looked Handler up and down and stated: "All of this is disgusting. This is f**king sick. Bye," then stormed out of the shower.

The sequence ended with Handler's Latin sidekick Chuy washing her back with soap.

Later in the episode, Handler revealed she opted to go fully naked for the skit while Bullock wore a nude thong and nipple pasties.

Watch the video below of Sandra Bullock shedding her good girl image, spewing profanity and slapping Chelsea Handler twice below . 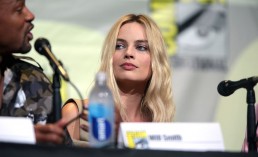