It's been one of the repeating accusations and comparisons of Donald Trump, the inevitable Republication party nominee for President: "He's Hitler!" or "just like Hitler". And now Trump's Wife, Melania has cleared the air and decisively settled the issue: He's not Hitler.

Just the very thought of a candidate's nationalist rhetoric, comments on race, drastically purposed policies and violent supporters sparking enough serious comparisons to the history's most infamous genocidal dictator that his wife has to directly answer the critically in an interview is kind of insane. Lot's of people compared Obama to Hitler, but nobody in the press ever asked Michelle about it.

The comment came in a recent profile in DuJour magazine. In the exchange, the interviewer asks Melania about the famous e-mail sent out by Louis C.K. to his fans back in March, in which the comedian called the real estate mogul/media personality turned candidate an "insane bigot" and "dangerous."

Surprisingly, Melania had never heard of the Emmy-winning comedian, who's been pretty mainstream for like the last five years. But she tackled the more pressing issue: Is her husband an American 21st Century equivalent to Adolf Hitler?

“He’s not Hitler," she says in the interview. "He wants to help America. He wants to unite people. They think he doesn’t but he does." And adds: "He doesn’t go after religions. He feels like we need to know who’s coming to this country. If not, we don’t have a country. That’s how he feels."

Although, Melania does conceded that "Maybe he needs to say it in a softer way."

Unfortunately, Melania Trump's assurance doens't seem to be enough for some people. Probably because if she WAS married to Hitler, "He's not Hitler" would just be the kind of thing she'd say. Here are just some of the responses on Twitter to the comment:

Sorry Melania Trump, but when you need to clarify that your husband ISN'T Hitler, you've already lost the argument.

When your wife has to tell America her husband is "not Hitler," you know there's a problem: https://t.co/LWatKl1Lqw pic.twitter.com/IJxbLJtJjr — Marlow Stern (@MarlowNYC) May 17, 2016

Melania Trump: Donald is “not Hitler.” Reassuring, but she suspiciously failed to deny that he’s Mussolini.https://t.co/hbkDw0lZVd — Andrew Kirell (@AndrewKirell) May 17, 2016

"He’s not Hitler" is a wonderfully ringing, not at all terrifying endorsement of your husband's presidential run: https://t.co/FNBc1otrCQ — Asawin Suebsaeng (@swin24) May 17, 2016

does anyone have a crawl space i can borrow gonna have to lay low for a while starting next year https://t.co/BeFPCKCl4e

Melania Trump on Donald: "He’s not Hitler": Is Trump ready for a DNA test to prove otherwise? #FoxNews #UniteBlue pic.twitter.com/keXDYoKfP1 — GruveOn (@GruveOn) May 17, 2016

Melania Trump wants everyone to know that her husband is “not Hitler”. #ThanksForTheClarification pic.twitter.com/xbxKq9TERY — Dr. Matt (@DrMatthew) May 17, 2016 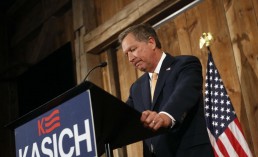 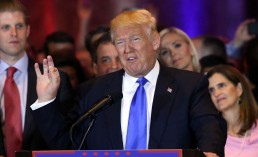 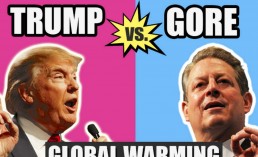