The second Presidential Debate of 2016 went down Sunday night and as usual, Republican nominee Donald Trump had plenty of quotes that still have people talking.

It wouldn't be a debate without Trump making some bold claims and statements, and there was no shortage of them during Sunday night's debate, which took place at Washington University in St. Louis. His quotes ranged from attacking his opponent, Democratic nominee Hillary Clinton, to speaking about some of his more extreme policy plans.

Here are Trump's top five most memorable quotes from the second Presidential Debate:

Heading into Sunday's debate, the topic on just about everybody's minds was how Trump would respond to the recently leaked 2005 audio of the presidential nominee telling Billy Bush some sexually aggressive thoughts on women. Trump apologized a few times during the debate, but also flipped it around and said that he has respect for women, and women have respect for him.

"The thing you should be apologizing for is the 33,000 emails you deleted... If I win, I am going to instruct my Attorney General to get a special prosecutor to look into your situation."

Twitter was abuzz after Trump told Clinton that he would essentially order a special investigation into her email situation. When Clinton noted that it was good he wasn't in charge of the law in America, Trump added, "Because you'd be in jail."

"Muslims have to report the problems when they see them... If they don't do that, it's a very difficult situation."

Another moment that had people talking was when a Muslim woman in the audience asked Trump what he would do to help people like her in America with the rise of Islamophobia. Trump admitted Islamophobia was "a shame" but then pivoted to talking about radical Islamic terrorism, saying that Muslims should report on others in their community who might be threats to America.

"I am looking to appoint judges very much in the mold of Justice Scalia."

Taking about appointing Supreme Court Justices, Trump said he would find judges who were similar to the recently deceased Antonin Scalia. Through his stint as Supreme Court Justice, Scalia fought for the conservatism of the Constitution and became well known for his extreme views on gay rights, abortion and many other civil liberty subjects.

The final question of the night forced Clinton and Trump to name one thing they respect in the other person. In a rare moment of positivity, Trump praised Clinton for being a fighter for so many years, refusing to give up even as she dealt with great GOP resentment. 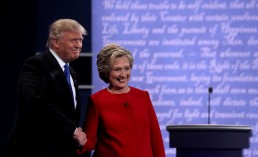 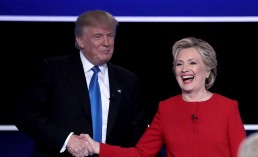 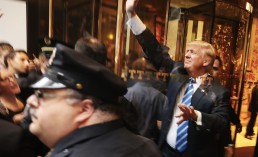